Starting the day at 163/2, India Red ended with 285 thanks to a century from Ankit Kalsi and Karun Nair's 99. Jaydev Unadkat then took two wickets as India Blue were 74/3 at the close of play. 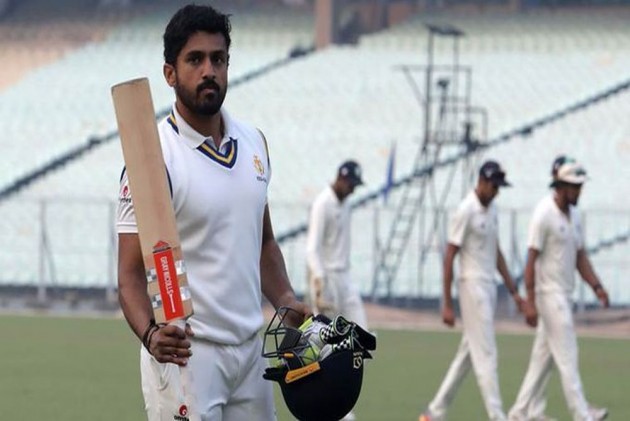 Out-of-favour India batsman Karun Nair missed out on a century by one run but Himachal Pradesh's Ankit Kalsi made 106 before India Red were all out for 285 in their Duleep Trophy match against India Blue in Bengaluru on Saturday (August 24). (CRICKET NEWS)

India Red fought back to reduce their opponents to 74 for 3 in 24 overs at stumps, getting the key wickets of the highly-rated Shubman Gill (9) and in-form Ruturaj Gaikwad (37).

Earlier, resuming at overnight 163 for 2, Nair's hopes of scoring a hundred were dashed when he was stumped by Snell Patel off left-arm spinner Saurabh Kumar.

After losing Harpreet Singh Bhatia (2), Kalsi found an able partner in the talented Ishan Kishan (50), and the two built a crucial partnership.

While the left-handed Kalsi continued with his stodgy ways, fellow southpaw Kishan was more enterprising and hit some attractive shots.

His exit, however, put paid to the team's hopes of putting up a 300-plus total.

Services medium-pacer Diwesh Gurdev Pathania got Kishan to edge an outswinger to Ricky Bhui at slip and bowled Axar Patel in the next ball.

Jaydev Unadkat denied Pathania a hat-trick with a forward defence.

Kalsi, meanwhile, moved into the 90s and appeared to be in danger of missing out on a ton, as Red slipped to 276 to 9. He, though, managed to reach the century, off 339 balls, with an inside edge off Pathania.

Pathania was the best bowler for Blue with a haul of 4 for 55 from 32 overs, while Saxena took 3 for 57 and Aniket Chaudhary captured two wickets.

When India Blue batted, opener Snell Patel fell in the 5th over to Unadkat for a duck. Skipper Gill hit two boundaries but was trapped leg-before by Unadkat.

Gaikwad provided some solidity at the top but his knock of 37 ended when pacer Avesh Khan had him caught by Karun Nair.