India Red's Karun Nair, who had scored 99 and 166 not out in the previous Duleep Trophy game against India Blue, picked up 14 fours during his enterprising knock against India Green 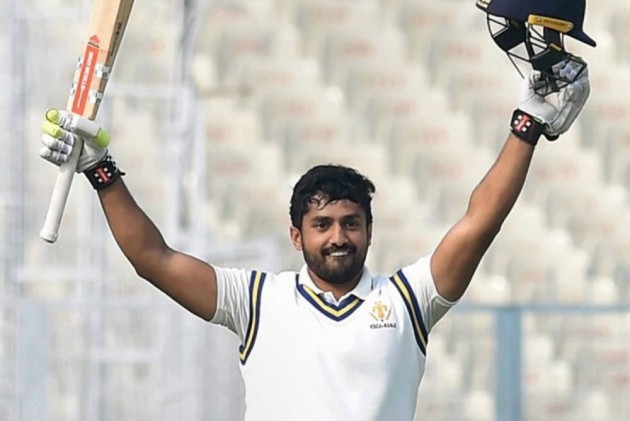 Karun Nair continued his impressive form, hitting an unbeaten 77 as India Red reached 140 for 2 in their first innings in reply to India Green's 440 all out at stumps on day two of the Duleep Trophy match at Bengaluru on Friday. (More Cricket News)

Karun, who had scored 99 and 166 not out in the previous game against India Blue, picked up 14 fours during his enterprising knock. The other opener Abhimanyu Easwaran was retired hurt.

Karun, who joined captain Priyank Panchal after Easwaran retired hurt (on 3, 22 balls), was on the look out for runs from the word go, continuing his good form from the previous match.

Dharmendrasinh Jadeja (37, 54 balls, 5 fours), who joined Wadkar in the middle, played aggressively and quickly raised 51 runs for the sixth wicket.

However, he was dismissed by Wakhare for his second wicket, caught by Panchal.

The 'Green' innings fell apart after Jadeja's dismissal as Vidarbha spinner Akshay Wakhare picked up two wickets while Kerala paceman Sandeep Warrier got into the act, accounting for Rahul Chahar (1) caught behind by K S Bharat and Ankit Rajpoot (0) bowled.

Wakhare dismissed Ishan Porel to end the 'Green' first innings at 440 and complete his five-wicket haul.