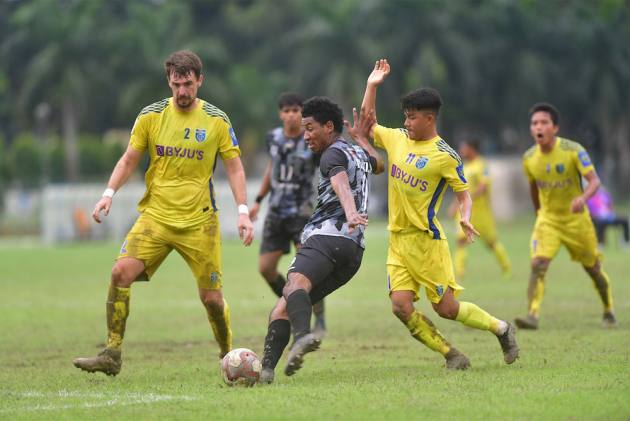 Delhi will now face another ISL giants, FC Goa in the third quarter-final of the Durand Cup 2021 on September 24 at Mohun Bagan ground, Kolkata.

Delhi started the game on a bright note as they drew out a couple of outstanding saves from the Blasters goalkeeper. The Blasters also looked to probe with set-pieces, but Lovepreet did well to punch the ball out.

DFC then got a free-kick from quite a long way out, and Anwar Ali lined it up, but it went over the bar.

Plaza was then introduced by DFC, and he almost made an instant impact. In a chaotic situation in the box, he managed to turn three defenders and somehow get his shot away, but it was blocked.

A few minutes later, Samuel Shadap had a crack from distance, which the goalkeeper almost spilled.

It was indeed a very lively first half, but the teams went into the halftime break with a 0-0 scoreline.

Delhi FC again started the second half in a better way as an early chance presented itself. Some neat play down the right of the Blasters defense, Rinreithen Shaiza crossed it across the face of goal but Jangra couldn't get there in time and could only squeeze his effort wide.

A few moments later, Plaza who brought the ball down in the box, turned and fired a shot at goal, but it was straight at the goalkeeper and he parried it away.

Plaza was causing a lot of problems for the Blasters defense, and he finally had something to show for it in the 52nd minute.

He received the ball in the box with his back to the goal, turned two defenders, dragged it onto his left and found the bottom corner of the near post. DFC got their well-deserved lead.

The Blasters then had a few half-chances, before a golden chance fell their way. It was a one-on-one with the goalkeeper, and with Lovepreet beaten, the ball was only to be tapped into the open net.

However, Anwar Ali heroically got back to make a stunning goalline clearance, and preserved his team's 1-0 lead.

Sergio Barboza then had a great chance to make it 2-0, but his left-footed strike was kept out by the goalkeeper.

Kerala Blasters then saw one final chance to get their equaliser, but Lovepreet again made a stunning one-on-one save to deny them.