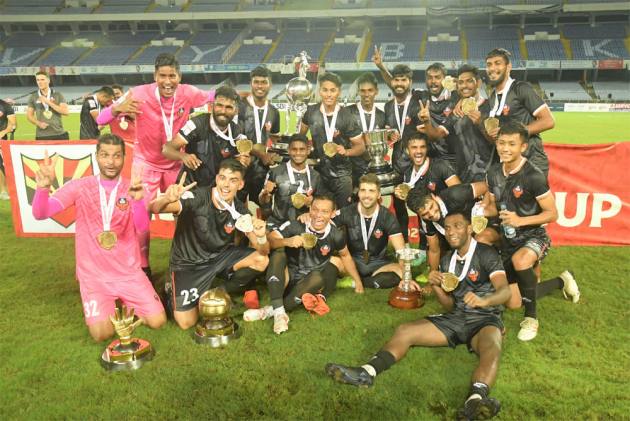 FC Goa along with two rolling trophies of the Durand Cup and the Shimla Trophy were also awarded the President’s Cup for permanent keeping.

The final kicked off on a lively note in front of 34,000+ spectators with both Mohammedan Sporting and FC Goa going on the attack from the word go. But the first real chance was created by Mohammedan Sporting in the third minute through Marcus Joseph, who shot it wide.

And soon, FC Goa created their own chance but a mix-up between Nemil and Romario in the box led to an easy save for the Mohammedan keeper.

As the half started to progress, the temperature started to increase and so thus the foul count. Mohammedan were at the receiving end as they received three yellow cards within a span of 17 minutes with Azharuddin Mallick, Nikola Stojanovic and Shaher Shaheen getting booked.

The match was slowly starting to open up and chances were being created more often but the goal remains elusive. A sudden moment of uproar came at the VYBK in the 35th minute when a shot from Milan Singh sailed over the bar.

For FC Goa, Romario had the best chance of the half. Mohammedan defence was completely foxed by a cross from Sanson Pereira from the left flank but Romario sent the shot wide of the goal post.

The first half ended with the scores tied at 0-0.

The last few minutes before the stoppage time saw some moments of excitement. Mohammedan made some good runs down the left flank in the last five minutes but again, failed to make them count.

In the injury time, Tlang came close breaking the deadlock but the the ball went across the face of the goal. With scores tied at 0-0 at the end of the regulation time, the final went into extra time.

After a goalless first half in the extra-time, Milan was fouled just outsidet the Mohammedan box and captain Bedia produced a fantastic free-kick in the 105th minute. The Guars then survived a scare with two minutes left in the extra time. A Nikola Stojanovic shot from distance almost beat a diving Naveen Kumar.