Marcus Joseph, who played for Gokulam Kerala before scored the winning goal for Mohammedan Sporting in the 44th minute. 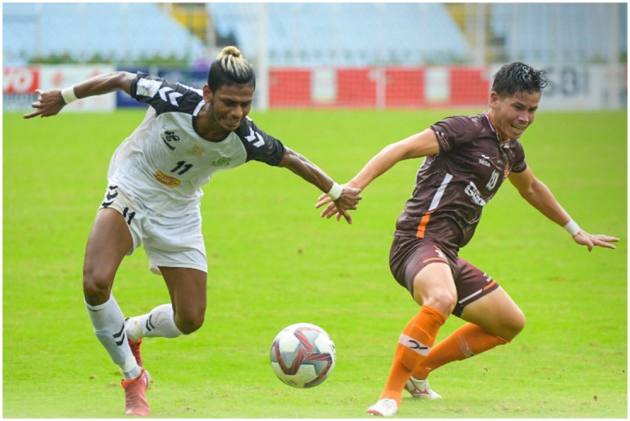 Once a Malabarian but now firmly a Black Panther, it was Marcus Joseph who broke Gokulam hearts by scoring the match-winner for Mohammedan in the 44th minute.

Under head coach Vincenzo Alberto Annese, Gokulam have built a reputation for being a free-scoring team. They were the highest goal scorers in the group stage with 10 goals. However against Mohammedan today, their midfield and attack appeared to be toothless.

Chances were few and far in-between, and the deadlock was broken in the 44th minute as a result of a Mohammedan counter-attack. At the other end, Bouba had a goal flagged offside only a minute earlier but as is often the nature of the game, Trinidadian Joseph capped off an excellent move to hand the home side the advantage.

Gokulam did very little to alter the outcome in the second half but with the margin just being one goal, the final few minutes were intense. Mohammedan did enough though, to hold on and reach the Durand Cup semifinals.

The other quarterfinal between FC Goa and Delhi FC will be held as scheduled on Friday but the venue has been shifted to Kalyani from Kolkata.

“The decision has been taken given the incessant rain in the city of Kolkata over the last few days, leaving the conditions at the Mohun Bagan ground unplayable,” the organisers said in a separate release. The kick-off timing remains the same at 2 pm.