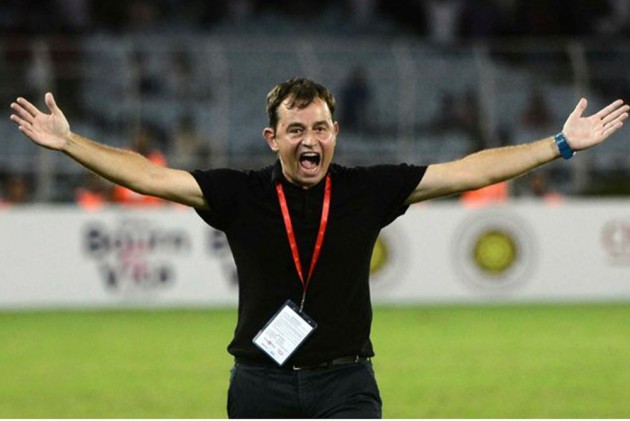 Mohun Bagan coach Kibu Vicuna blamed refereeing for their Durand Cup final loss to 10-man Gokulam Kerala 1-2 in front of a boisterous crowd at the Saltlake Stadium on Saturday (August 24).

Marcus Joseph scored a brace for the Kerala outfit while Mohun Bagan reduced the margin in the 64th minute when Salva Chamorro scored from Joseba Heitia free-kick.

Vicuna claimed that the move of the first goal from a penalty was off-side. He also blamed the referee Ajitkumar Meitei for not awarding a penalty in the 90+6th minute when Muhammad Irshad came in the way of Chamorro inside the box.

Mohun Bagan too got a red card when Fran Morante, who was on the bench, shouted at the referee and linesman in the 90+7th minute for not giving a penalty.

"I think there were two situations. For the first goal, I thought Henry (Kisekka) was offside slightly and second was the penalty," the Spaniard said about Kisekka being brought down by their goalkeeper Debjit Majumder.

"I don't want to give an excuse. But tonight for me the first goal was offside at least on the field. Also, the penalty was genuine. It was unbelievable. I respect the referees but the fourth official disrespected me. That is not something I will accept," Vicuna said.

In both instances, TV replays showed that Kisekka was on-side, while Irshad did not hand the ball in the dying minutes of the game.

The coach, however, conceded that it was not their match as they were tired after playing 120 minutes against Real Kashmir in the semifinals.

"It wasn't our match since the beginning. I felt the team was tired. We tried and tried but the tempo was slow. Perhaps it was too much playing every 3 days. They were physically better than us but we finished well. It was a crazy game."

"We have not even trained for two months. The players are adapting to a particular style. The team is playing good football. Tonight the opponent pressed hard. As I said before we have a lot of things to improve," he added.

This was Mohun Bagan's third consecutive Durand Cup final after 2004 and 2009.

Incidentally, Gokulam Kerala's semifinal match against East Bengal too stretched past extra time as they settled the issue in the penalties.

Marcus Joseph finished with 11 goals from five matches to be adjudged Man of the Match Golden Boot winner.

"My dream has come true. Yesterday I was telling Ettienne that we have to win the tournament. We came one month before and winning the trophy now is great," he said dedicating this win to his family back home in Trinidad.