The 2019 Durand Cup final was all about Marcus Joseph, whose 10th and 11th goal of the tournament proved to be enough for Gokulam Kerala in a dramatic title clash Vs Mohun Bagan, at Salt Lake Stadium, on August 24. 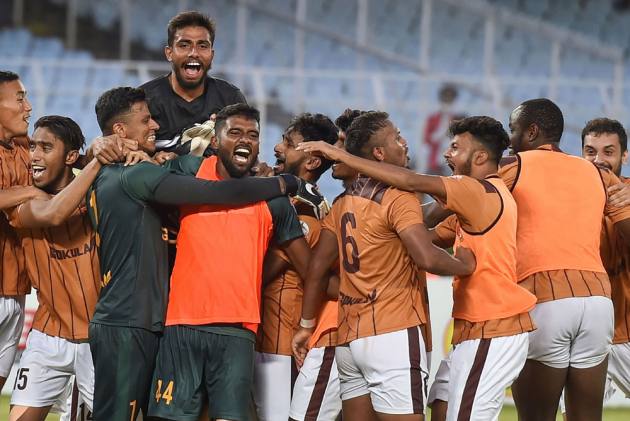 Heavyweights Mohu Bagan faced a dramatic 2019 Durand Cup final loss at the hands of Gokulam Kerala in Kolkata's Salt Lake Stadium, on August 24. Marcus Joseph was the South Indian side's hero, scoring a brace which completely silenced the local supporters. Meanwhile, Salva Chamorro scored Bagan's solitary goal of the evening. The win also marked the famous trophy's return to Kerala after nearly 25 years, while Bagan will have to still wait for another record 17th Durand title. Here are the highlights of the 2019 Durand Cup final match between Mohun Bagan and Gokulam Kerala. (REPORT | STREAMING | FOOTBALL COVERAGE)

19:01 hrs IST: FT' And it's over! Gokulam Kerala win the 129th Durand Cup! What a story! A club that was founded in 2017, win India's coveted football trophy. Marcus Joseph's brace was enough for the visitors to win this game, but what a close game it has been!

A penalty which was never given! VP Suhair couldn't perform against his native Kerala! Marcus Joseph heroics in Salt Lake Stadium! It's not Kibu Vicuna, but Fernando Valera!

Throw in for Gokulam.

18:51 hrs IST: 88:05' Pushing and shoving between Pelissari and Gonzalez. It is getting to that point of the game, when nerves get the better off you and tempers flare! Yellow card for both of them!

18:49 hrs IST: 85:59' Pelissari taking his time as the crowd awaits a Gokulam corner. He loops it in, good dummy by Gokulam but well read by Beitia. The corner is taken care off. Time is getting over for Bagan. Can they find a moment of magic. Also red card for George for a blatant foul!

18:47 hrs IST: 84:22' Beitia loops in a corner. GURJINDERRRR!!! Oh, he completely misconnects and heads it high. Bagan still need a goal to take the match to extra-time.

18:46 hrs IST: 83:06' Lovely skill from Gonzalez, but he fails to slot it past Ubaid. The Gokulam goalkeeper was in the right place at the right time, otherwise it would have been a sublime team goal by Bagan.

18:43 hrs IST: 80:00' Gokulam are on the counter now! Pelissari on the right side! He receives a long ball from Joseph, but hits it straight at Debjit. He had options, two more golden shirts with him, but he chose glory and failed.

18:41 hrs IST: 78:14' Pelissari attempts a shot inside the Bagan box, but Debjit punches it away. And Bagan are off to a counter! Complete end-to-end!

19:36 hrs IST: 73:07' GONZALEZZZ! The super-sub tries a screamer, but Ubaid dives and pushes it away. The Gokulam custodian looks completely out of confidence after his earlier mistake. One mistake, and Bagan could be back into the game.

It falls towards Beitia, and he begins his trademark dribble, but can't find his way through. Mohun Bagan are playing way too high in search of an equalizer but it could seriously hurt them. Marcus Joseph always plays on the shoulder of opposition defenders. He could suddenly be all free, to complete his hat-trick.

Poor goalkeeping by Ubaid, he spilled it towards Chamorro

18:17 hrs IST: 56:15' Bagan are in danger of conceding another goal! Complete shambolic defending! Bagan looked defensive good before this match, and Kibu Vicuna received the laurels! But then it looks like, the team can't handle big-match pressure! A complete contrast to their glory days!

18:11 hrs IST: 52' 11th goal for Marcus Joseph! He has probably sealed the tie for Gokulam! Valera has found a machine in Joseph!

18:04 hrs IST: HT' Chamorro needs to combine with Suhair, that is where Bagan's main weapon lies. As we saw in the semis against Real Kashmir, the duo were the reason behind their side's dramatic victory.

18:00 hrs IST: HT' Bagan really need to be more clinical in the final third. The local side have kept more of the ball but have been ripped apart after losing the ball. In fact, that's how the penalty came! Debjit has been good for Bagan in the first half, but the foul against Kisekka which led to the penalty has completely pushed the match in favour of the visitors.

A close first half, which saw both teams go through testing moments! Bagan had more possession, but Gokulam were more useful in the final third in certain moments. Marcus Joseph scored his 10th goal of the Durand Cup campaign and gave GKFC the lead.

17:48 hrs IST: 45:00' MARCUS JOSEPH!!! The Gokulam captain finds his tenth goal of the campaign. A cool penalty from the spot, easily beats Debjit!

17:48 hrs IST: 44:02' Kisekkaaaaaaaa! What a counter by Gokulam, and the man in question gets fouled inside the Bagan penalty after a brilliant touch from a Joseph pass. Debjit gets the foul. Penalty for GKFC!

17:46: 42:00' It is what everyone had expected. Bagan with more possession and Gokulam with the counter-attacks. Still nil-nil though.

17:39 hrs IST: 36:40' Naorem! The youngster tries to dribble in a crowded Gokulam penalty box, but loses concentration. He could have created something as Beitia was free, but failed under pressure.

17:37 hrs IST: 34:44' Marcus Joseph with the cross! Punched away by Debjit, before Kisekka could get anywhere close to it!

17:31 hrs IST: 28:40' Marcus has become the shining beacon for Gokulam in this tournament. Bagan defenders are finding it hard to deal with his mazy runs!

17:23 hrs IST: 21:37' Beitia from distance! He has done it before but he couldn't do it now! He attempts a long ranger, but it loops way too high above the goalpost.

17:20 hrs IST: 18:23' First yellow card of the match. The referee shows the card to Meitei. Very smart by Mehta. In fact it was more of a touch from Ashutosh than from Meitei.

A decent cross by Gurjinder, but Morante heads it way too high!

The home side is maintaining possession but are not being able to show their usual flair. Meanwhile, Gokulam is sitting deep and waiting for counter-attacks.

17:13 hrs IST: 11:52' Beitia loops in a corner but Morante fumbles it in the air, and Gurjinder puts in a poor cross. Easily dealt with by Gokulam.

17:11 hrs IST: 10:15' Bagan look a little bit rusty and are being bombarded with some good wing play by Gokulam.

17:09 hrs IST: 07:25' Marcus Joseph is finally getting into the match. He tries to create a magical moment, something which he has done in this tournament. But he fails, and Gurjinder comfortably comes to his team's rescue.

Gokulam get an early chance! Meitei cuts in from the right and tries to curl it from his left, and he was left all alone. But he completely hits it wide! Poor effort!

17:04 hrs IST: 03:15' Both teams are playing different styles. Gokulam have come in with five defenders, with a rather rigid approach. Meanwhile, Bagan will aim to attack and score the early goal! We could see a lot of wing play indeed!

16:56 hrs IST: The players are currently in the pitch, performing the necessary traditions before a football match.

16:55 hrs IST: When asked about his side's talisman, Valera went onto to say, "Marcus is our captain and we are proud to have him with us. It represents the spirit of team effort and also has a quality that gives the team a plus."

Speaking ahead of the match during the pre-match press conference, Bagan gaffer Kibu Vicuna told reporters, "It will be an open match. I don't think we are favourites. Both teams have same possibility to win. It is 50-50. Both teams are equally good and played tough matches in the semifinals."

16:52 hrs IST: Nobody expected Gokulam Kerala to reach the final. Nobody expected them to beat East Bengal in the semifinals! Their current form is mainly due to their star captain Marcus Joseph.

Speaking to Outlook, Gokulam head coach Fernando Valera said, "We always work trusting our potential, respecting the rivals but always being competitive. The main objective was to always improve our own version."

16:49 hrs IST: Bagan will be aiming for a record 17th Durand title, having last won it in 2000, when they edged past Mahindra United.

Meanwhile, Gokulam are en route to making history, as it has been 22 years since a club from Kerala have won the Durand Cup. FC Kochin were the previous one to have held the trophy, and the only side from the state to do so.

16:38 hrs IST: Gokulam will be relying heavily on their captain Marcus Joseph, who notched a last-gasp equaliser against the Red and Gold Brigade, and is currently the top scorer with nine goals. But the question remains, if he can handle the pressure in a big match like this and too in front of a hostile reception in Salt Lake Stadium.

16:25 hrs IST: Hello and welcome to Outlook's live coverage of the 2019 Durand Cup final between local side Mohun Bagan and South India's Gokulam Kerala. Both sides will be hoping to win their first title of the 2019-20 Indian football season. Promises to be an exciting contest between two well-drilled tactical teams!