It was Danish Farooq, who scored a 90th-minute winner for Real Kashmir in their Group C Durand Cup fixture against fellow I-League side Chennai City, in West Bengal's Kalyani Stadium on August 7. 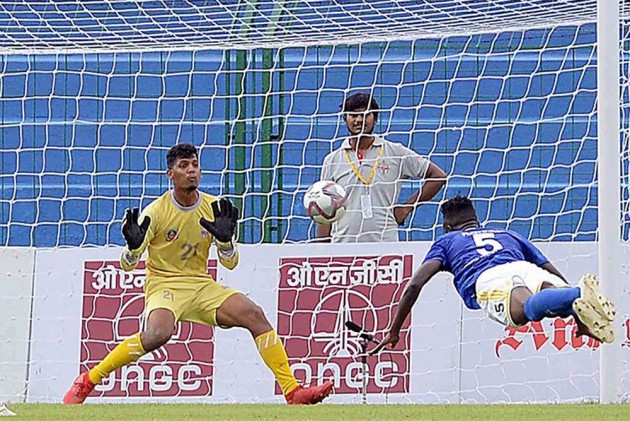 Real Kashmir FC overcame the mental turmoil arising out of uncertain situations back home as they beat Chennai City FC 1-0 through a last-minute goal in the 129th Durand Cup fixture, in Kalyani Stadium, on August 7.

A Danish Farooq long-range strike in the 90th minute gave the 'Snow Leopards' a solitary goal win over the Chennai side.

With a lockdown in force in Jammu and Kashmir in the aftermath of the scrapping of Article 370, Real Kashmir assembled for the first time this season here late Monday night only to realise they're cut off from family members back home.

But it did not show in their performance as the David Robertson-coached side dominated against the reigning I-League champions who fielded a reserve side full of local players.

The inexperience of Chennai City showed when goalkeeper Kabir T handled the ball outside the penalty box to be sent off in the 76th minute.

Seizing on the numerical advantage over the Chennai side, Real Kashmir stepped on the attack and in the 90th minute their star player Farooq sent a powerful right-footer from a long-range, which beat substitute goalkeeper Prateek Singh all ends up.

"We play professional football. You have to be professional. These sort of things keep happening. Tomorrow something else may happen. Football teaches you how to tackle these situations and play well despite the odds," Farooq said, reflecting on the situation back home.

Showering praise on their Scottish coach, he said it's Robertson job to keep the players in good mood despite all odds.

"Our team atmosphere is like this only, all thanks to our coach. He keeps everyone in good mood and never let us bog down by any pressure. He plays a big role. He keeps motivating us. Don't keep anything in mind just focus on the game," said Farooq.

"It's our first match of the season. We never knew what would be our result and we assembled after a long time. So I'm sure this win will boost our confidence. There's a positive atmosphere in the team," he said.

In their debut I-League season, Real Kashmir were in the title race at one stage before finishing third behind Chennai City and East Bengal.

"Our off-season was going on and we met each other two days ago here at the hotel only. Our preparation just began with Durand Cup. Our main goal is I-league. This tournament will help us in getting fit," he said.

Hailed as the 'Ronaldo of Kashmir', Farooq had a stomach bug on the eve of the match as he struggled to get going early on a drenched afternoon here.

Farooq and Subhas Singh both missed successive opportunities in a second-minute move when the ball ricocheted off the post, in what was their best chance of the match.

But Farooq finally made it count to seal the three points before the final whistle to keep their semifinal hopes alive.

Dedicating the goal to the entire team members, support staff and owners, Farooq said: "They have been hardworking to make a good competitive team. They asked to put up a better show. We will try to do well in upcoming matches as well."

Real Kashmir play Army Green on August 10 and Chennai City will play FC Goa on August 14, both at Kalyani Stadium.