Dutee Chand, Hima Das To Get One Last Attempt To Qualify For Tokyo Olympics

Graded as 'B' category event by World Athletics, the five-day event offers some of the top athletes a chance to breach qualifying standards for an automatic Olympic berth 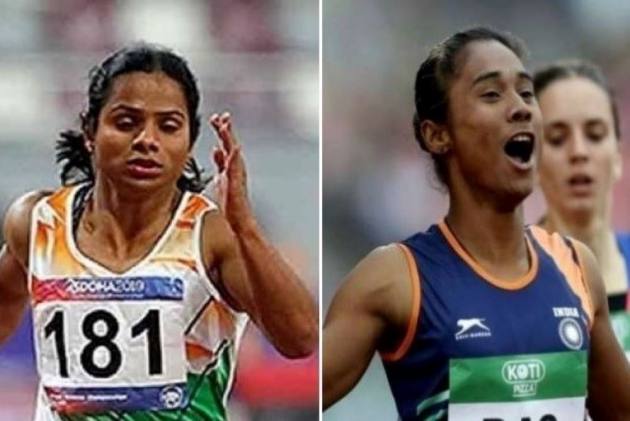 A host of top Indian track and field athletes, including the likes of star sprinters Dutee Chand and Hima Das, will make one last attempt to book their Olympic berths in the National Inter-State Championships beginning in Patiala on Friday. (More Sports News)

Graded as 'B' category event by World Athletics, the five-day event offers some of the top athletes the chance to either breach qualifying standards for an automatic Olympic berth or garner valuable ranking points to make it to the Games.

The championship, which is being held under strict COVID-19 protocols, was earlier scheduled to be held in Bengaluru but shifted to the NIS campus here in view of the possible logistical issues as the elite athletes who are based here will not to travel to the Karnataka capital due to the pandemic.

Two Olympic-bound athletes, star javelin thrower Neeraj Singh, who is currently on a training-cum-competition tour of Europe, and 3000m steeplechaser Avinash Sable will not take part in the event.

Dutee missed the automatic qualification mark of 11.15 seconds by two-hundreths of a second during the Indian Grand Prix 4 here on Monday, though she broke her own national record. She will be looking to do better and book an automatic berth though she is on the verge of making it to the Tokyo Olympics on the basis of world rankings.

Hima, who has had a lower injury problem for a long time, ran her personal best of 20.88 seconds in 200m at the IGP 4 but missed the automatic qualification mark of 22.80 seconds.

She has to breach the qualifying standard if she wants to book a Tokyo ticket as her world ranking may not be good enough for an Olympic berth.

Hima is also a part of the 4x100m relay quartet along with Dutee, Archana Suseendran and S Dhanalakshmi, who are looking to book a Tokyo Games berth.

They broke the national record during the IGP-4 but their timing of 43.37 seconds was not enough to place them in the top 16 in the Road to Tokyo list.

To do that, they have to run at least below 43.05 seconds -- the timing of the 16th place team in the list -- and wait till the deadline of June 29. The Indians are currently in 20th spot.

Similarly, the men's 4x400m relay squad of Muhammed Anas Yahiya, Amoj Jacob, Arokia Rajiv and Noah Nirmal Tom will aim to improve its time from 3:02.61s clocked during the IGP-4 to 3:02.56s or even better it to lift itself from the present ranking of 16 to be sure of a Tokyo ticket.

For relay events, the top 16 teams in the Road to Tokyo rankings on June 29 midnight will run in the Olympics. Teams from Sri Lanka and Maldives are also taking part in the men's 4x400m and women's 4x100m relay events to give it an international status and meet a stipulated rule for Olympic qualifications.

Other Sri Lankans are also lining up in individual events in their last bid to earn themselves a place in the Tokyo Games. Nadeesha Ramanayake (women's 400m) and Nimali Waliwarsha (women's 800m) are among the prominent names from the island nation.

Men's high jumper Tejaswin Shankar will be another athlete who would be trying to breach the Olympic qualifying mark of 2.33m. He had won a gold at the Big 12 Outdoor Track and Field Championships in USA on May 16 with a jump of 2.28m.

The Delhi athlete, who is currently studying at Kansas State University, has flown down from the US to take part in the championship. He has a slim chance of making it to Olympics on the basis of world rankings.

As many as six finals are scheduled for the opening day on Friday. Pole vault and 10000m race are the two events for men while the women will compete in the 5000m, 100m hurdles, triple jump and hammer throw for medals.

Given the COVID-19 situation and to reduce the crowding of athletes, the championship is being held in two locations, including the Punjabi University grounds here.

Besides the 4x400m mixed relay team, as many as 11 Indian athletes have already qualified for Tokyo Olympics in individual events.