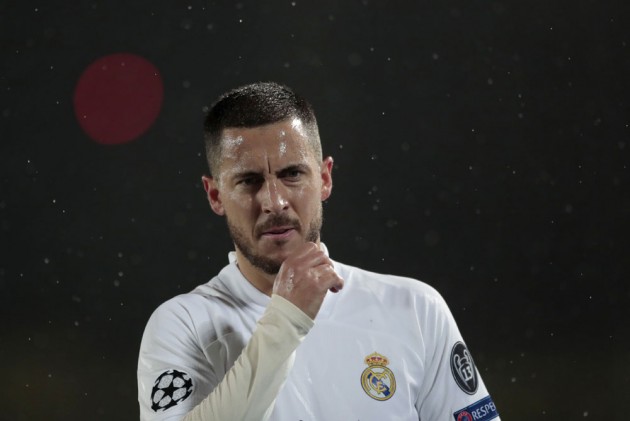 Eden Hazard is happy to keep progressing "step by step" after playing 24 minutes for Real Madrid against his Chelsea "friends" in the Champions League. (More Football News)

Hazard started from the bench for Madrid in Tuesday's home first leg of their semi-final tie, which ended 1-1.

The winger had only returned from more than a month out against Real Betis at the weekend, finally putting his latest injury setback behind him.

A series of issues have meant the meeting with former club Chelsea saw Hazard make just his 38th Madrid appearance since signing in 2019.

Like much of his career in Spain, it was a largely forgettable cameo, having only 12 touches and failing to attempt or create a shot.

But Hazard was simply happy to be back involved, explaining: "I just want to go step by step.

"Of course I want to play, I want to be on the pitch, but the last game I played 15 minutes, today I played a bit more.

"We have a couple of big games to play until the end of the season, so I just want to be ready for them.

"Now I feel better, the condition's better and the body's better, so I'm just happy that I can play again."

5 - Thomas Tuchel has faced Real Madrid more often without losing in the UEFA Champions League than against any other opponent (W1 D4) – in the competition’s history, he is the only manager to face Los Blancos as many as five times without ever losing. Elite. #UCL pic.twitter.com/QQGvAdKci0

Hazard has so far been involved in only nine Madrid goals, yet he scored 110 times and provided 81 assists in seven years with Chelsea to earn his move.

"It's always good to play against friends," he added. "I have a couple of friends over there.

"But it's always good to see some good faces."

Hazard will hope to be able to use his experience of Stamford Bridge to Madrid's advantage in next week's return leg.

Madrid have not beaten Chelsea in four meetings but may now require a victory to advance after conceding an away goal to Christian Pulisic.