Tottenham are two EFL Cup wins away from ending their long trophy drought after seeing off Championship side Stoke City. 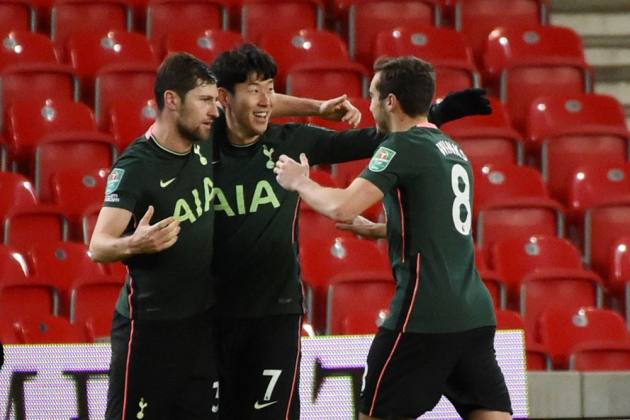 A thunderous strike from Ben Davies and Harry Kane's 16th goal of the season sealed Tottenham's place in the EFL Cup semi-final as Stoke City were consigned to a 3-1 home defeat. (More Football News)

Spurs dominated the first half and Gareth Bale put them ahead with a glancing header on a miserable Wednesday evening.

Bale was withdrawn at the break, leading to concerns he may have sustained another injury, and Jordan Thompson equalised with Stoke's first shot of the tie eight minutes into the second half.

Spurs were not to be denied a place in the last four, though, as Davies thumped in from distance before Kane sealed a first win in four games as Tottenham moved to within two victories of lifting their first trophy since 2008.

10 - Harry Kane has scored 10 goals in 11 games against Stoke in all competitions, making the Potters the 5th team he's reached double figures against in his club career. Perfect. #STOTOT pic.twitter.com/m5vkR7UVGb

Tottenham were well on top from the start and Andy Lonergan beat away Kane's venomous strike from a tight angle, though the visitors had their lead when Bale cleverly nodded in an inviting Harry Winks cross in the 22nd minute.

Lonergan spread himself well to deny Dele Alli, who was thwarted again by a fingertip save from the Stoke goalkeeper when his measured shot was heading for the bottom corner.

Son Heung-min replaced Bale at the break and Stoke were level from out of the blue after 53 minutes, Thompson tucking Jacob Brown's cross home with his left foot.

Fit-again Erik Lamela came on alongside Moussa Sissoko, replacing Alli and Lucas Moura, as Jose Mourinho tried to inject some impetus, though it was Davies who provided the quality Spurs had been lacking in the second half, collecting a loose ball and driving in off the post from long range.

Son should have had Spurs' third but the flag was incorrectly raised, with no VAR in this competition, but Kane rifled home clinically to give Tottenham breathing space, with Steven Fletcher missing the chance to set up a tense final when he headed wide.

What does it mean? Spurs scenting elusive silverware

Tottenham, whose manager Mourinho has won this competition on four occasions, have slipped to sixth in the Premier League table after picking up just one point from their last three games, but they did not look like a side lacking confidence.

Stoke did not pose a threat until Thompson levelled from out of nowhere, but the London club were able to move up a gear after that setback to end their mini slump.

Hojbjerg and Winks lay the foundations

Captain Kane was outstanding, leading the line exceptionally and getting his reward with a 10th goal in all games versus the Potters, who are the fifth team he has scored double figures against. But while he will get the headlines, Hojbjerg and Winks ran the show in the middle of the park.

The combative Hojbjerg gained possession a game-high 15 times, with Winks doing so on 10 occasions. Hojbjerg also had more touches (114) than any other player, while his fellow central midfielder Winks misplaced only five of his 77 passes, and laid on the opening goal for Bale.

Bale brought back down to earth

On-loan forward Bale showed his class with a lovely finish to put Spurs in front, but he was guilty of some sloppy passes and poor deliveries before he was withdrawn.

Despite his third goal in his second spell at the club, Bale has not really got going since returning to Spurs, and it is not yet clear if he sustained another injury.

- Mourinho has reached the EFL Cup semi-finals for the fifth time, going on to win the competition on each of the previous four occasions his sides have got to this stage (2004-05, 2006-07, 2014-15 and 2016-17).
- Spurs have reached the EFL Cup semi-finals for the second time in the last three seasons, eventually being knocked out by Chelsea in 2018-19.
- Stoke have lost each of their last six matches against Spurs in all competitions, their worst ongoing losing run against any side.
- Bale has scored in consecutive EFL Cup appearances eight years and 53 days apart, with his previous goal coming against Norwich in October 2012.
- Davies scored his first goal for Tottenham since September 2017 vs Huddersfield Town, ending a run of 111 games without a goal in all competitions.

Spurs return to Premier League action with a trip to Wolves on Sunday and then host a London derby against Fulham three days later.