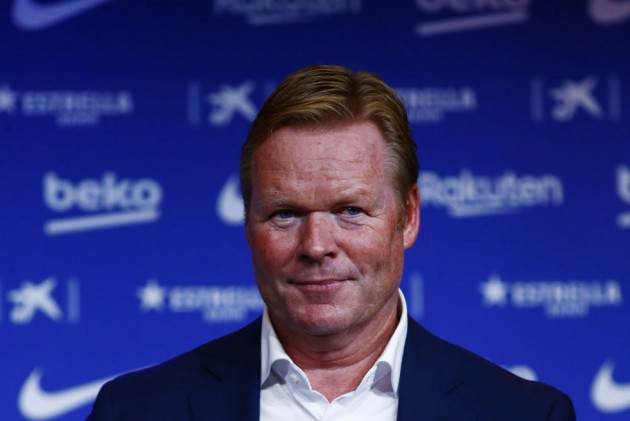 Ronald Koeman gets his first taste of El Clasico from the dugout on Saturday, when Barcelona host Real Madrid. (More Football News)

A favourite of Johan Cruyff's mighty 'Dream Team' of the early 1990s, the pressure is on Koeman the coach to get Barca back to winning trophies at home and in Europe after last season's miserable ending.

He will have a chance to earn some sizeable brownie points against a Madrid side who are reeling from back-to-back defeats to Cadiz and Shakhtar Donetsk, results that have placed much of the pre-game scrutiny on Koeman's opposite number, Zinedine Zidane.

As the former Netherlands boss looks to end a two-game winless run for Barca in Spain's grandest fixture, we look at how his predecessors fared in their first Clasicos in LaLiga...

Both dugouts featured coaches taking charge of teams in a Clasico for the first time and it was Guardiola who got the better of Madrid's Juande Ramos.

Late goals from Samuel Eto'o and Lionel Messi earned Barcelona the victory as they moved 12 points clear of Madrid in the table too.

That victory occurred during a 10-game winning streak in LaLiga and it was no surprise that Barca, who beat Madrid 6-2 later in the season, went on to win the title.

10 - Pep Guardiola has become the manager with the most wins against Real Madrid in all competitions in the 21st century (10), surpassing Ernesto Valverde and Diego Simeone (9). Nightmare. pic.twitter.com/C9dLkQQeVi

The two clubs had already met in the Supercopa de Espana at the start of the season, Madrid winning on away goals after both teams had won a leg apiece.

Their first league meeting of 2012-13 was all about Cristiano Ronaldo and Messi as both men scored twice in a 2-2 draw.

Ronaldo scored for a record sixth successive Clasico to put Madrid ahead and, after Messi had netted a brace, Los Blancos' Portuguese star took his tally to 160 goals in 155 games since his 2009 move from Manchester United with an equaliser.

All eyes were on new recruits Neymar and Gareth Bale and it was the former who scored first to set Barca on their way.

Alexis Sanchez would double that lead and though Jese Rodriguez pulled one back, Madrid fell to a defeat that left them six points behind Barcelona after just 10 league games.

Both teams would finish the campaign on 87 points, a total not good enough to win the league as Atletico Madrid claimed 90 to be crowned champions.

The Blaugrana had claimed 22 points from the first 24 available but they suffered defeat at Santiago Bernabeu in October 2014.

Barca debutant Luis Suarez, back after a four-month ban for biting, set up Neymar for a fourth-minute opener but the home side stormed back.

An in-form Ronaldo levelled from the spot with his 21st goal of the season before Pepe and Karim Benzema scored in the second half.

Los Blancos' awful start to the 2017-18 campaign continued as Barcelona moved 14 points clear of the defending champions with a comfortable win at the Bernabeu.

Suarez, Messi and Arturo Vidal all scored while Madrid, who had beaten Barca in both Supercopa de Espana legs at the beginning of the campaign, had Dani Carvajal dismissed for handball.

It was the first time Barcelona had won three successive league matches at the Bernabeu in Clasico history, and they went into the last match in our list with four straight victories at the ground.

Setien, who took over from Valverde in January this year, had Barca on a four-game winning streak in LaLiga ahead of their trip to the capital.

What followed was a miserable outing for the Catalans, as second-half goals from Vinicius Junior and Mariano Diaz – in his first league appearance of the season – secured the win for the hosts.

The result lifted Madrid to the top of the table and set them on course to win the title after the coronavirus-enforced break to the season. Setien was sacked in August, his final game in charge that humiliating 8-2 Champions League loss to Bayern Munich.