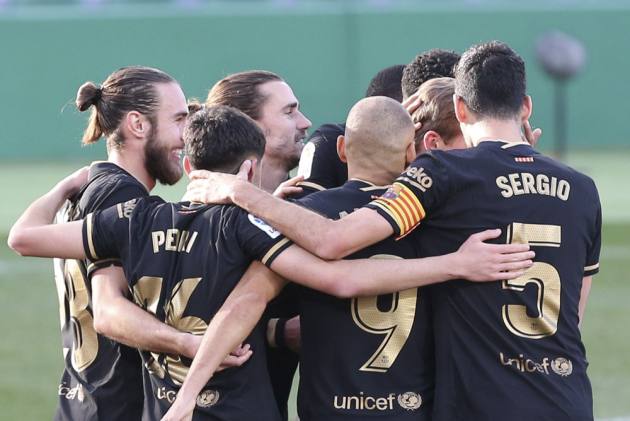 Lionel Messi completed his two-match suspension for a red card during the Supercopa de Espana defeat to Athletic Bilbao and Barca struggled to create clear chances in his absence against well-organised opponents.

But an error from Diego Gonzalez allowed De Jong to take advantage in the 39th-minute – the Netherlands international unlikely to score an easier one than his fifth LaLiga goal.

A minute from time, De Jong then turned provider as he crossed for Riqui Puig to head home, ensuring Barca are three points behind Real Madrid, although they will be 10 points shy of Atletico Madrid again if the leaders are able to beat Valencia later on Sunday.

5 - @DeJongFrenkie21 has scored more goals for @FCBarcelona in one season & a half in #LaLiga (five goals) than in his five campaign for @AFCAjax in Eredivisie (four). Brewing#ElcheBarcelona #ElcheBarça pic.twitter.com/OG4H5WFCUH

Ronald Araujo headed an early Barca chance over before Antoine Griezmann sought to shoulder the burden of Messi's absence.

The France international was involved in many of Barca's brightest moments and saw a dangerous 17th-minute chip cleared out of the Elche goalmouth.

Ousmane Dembele also posed questions with his direct running, although speculative efforts were all Barca managed until Gonzalez diverted Martin Braithwaite's left-wing cross towards his own net under pressure from Griezmann, with De Jong on hand to spare him the own goal by smashing in on the line.

There were fine saves at either end 10 minutes into the second half – Edgar Badia plunging to his right to deny Dembele after Marc-Andre Ter Stegen thwarted Emiliano Rigoni one-on-one.

The effects of three consecutive games with extra time coming into this fixture took a toll on Barca's sharpness as the second half progressed, but they managed a second in the closing stages.

With Badia having twice denied Trincao, it was fellow substitute Puig – taken off at half-time during the Copa del Rey tie at Cornella – who added gloss to the win.

What does it mean? Koeman's Blaugrana black and blue but battling

Any notion of a belated feel-good factor developing around Koeman's Barcelona was checked by Messi's red card, their Supercopa heartache and this week's flirt with embarrassment as Cornella took them to extra time.

Nevertheless, they have now won four out of four in LaLiga in 2021. Although they might not always set pulses racing, they are getting the job done.

De Jong has certainly grown in stature after a patchy first season at Camp Nou. He was rarely far from the heart of the action here, contesting more duels than any other Barcelona player (11), making 90 touches and completing 63 of 73 passes.

The pass that found Puig, who ended a difficult week personally on a high note, in pinpoint fashion at the end of a gliding run was immaculate.

No Elche player made more clearances (three) or gained possession (six) more often than Gonzalez, but he should have done better on the opening goal, where Griezmann's presence led to him botching the attempted clearance from Braithwaite's cross.

Barca travel to Rayo Vallecano in the Copa del Rey on Wednesday before hosting their Supercopa conquerors Athletic Bilbao next weekend, when Elche are at Valencia.