Adil Rashid turned on the style for England, but Moeen Ali's debut as captain ended in disappointment with a Twenty20 defeat to Australia 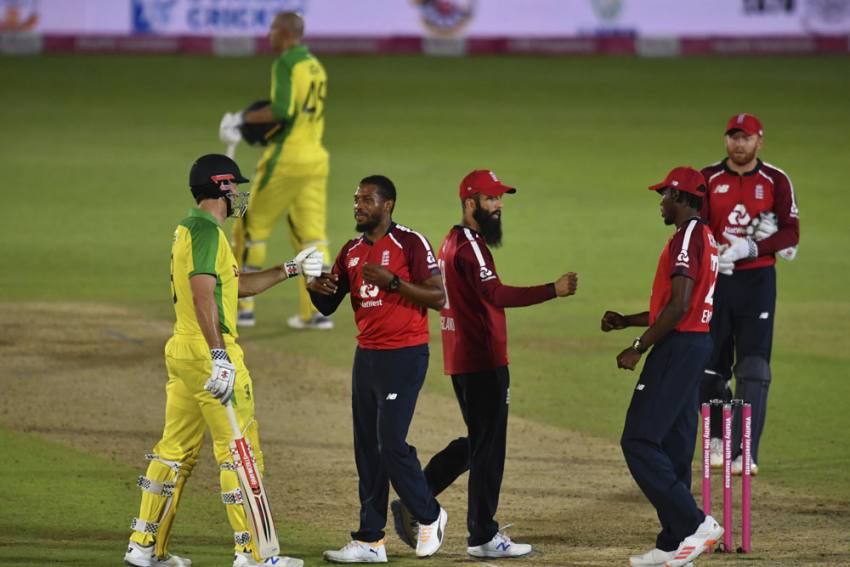 England and Australian players after the end of their third T20I match at the Ageas Bowl in Southampton
Glyn Kirk/Pool via AP
Omnisport September 09, 2020 00:00 IST ENG Vs AUS, 3rd T20I: Australia Stay No. 1 As England Fall Short Despite Adil Rashid Heroics 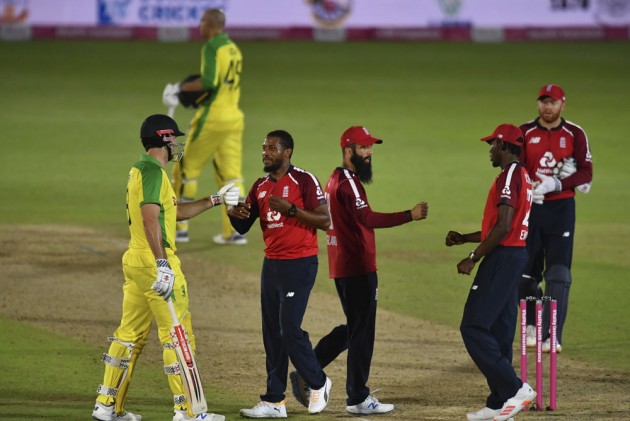 Australia survived a thrilling burst from Adil Rashid to win the final match in their Twenty20 series against England by five wickets and keep the number one ranking. (More Cricket News)

Top spot was on the line at the Rose Bowl, after England twice beat Aaron Finch's side to make sure they would win the series. This third and final game presented a chance for England to swipe away Australia's proud world-leading status, but the tourists raised their game to protect that position.

Rashid's 3-21, including a glorious googly that outfoxed Finch, almost turned the match England's way, but their attack was blunted once his allocation was used up, and the tourists stayed calm to get the job done.

Mitchell Marsh made his highest T20 international score - 39 not out - to guide Australia beyond England's 145-6, his chancy single off Chris Jordan securing the win with three balls to spare.

It means Australia remain premiers in the International Cricket Council's T20 standings, albeit with England perched right behind them.

Siri, show me the perfect googly...

Tom Banton was promoted to the top of the England order in the absence of Jos Buttler, with Moeen Ali captaining the side for the first time with Eoin Morgan ruled out by a finger injury.

Australia put England in, and the reshuffling got off to a worrying start when Banton fell for two to Josh Hazlewood.

Opening partner Jonny Bairstow made a brisk 55, Dawid Malan added 21, Moeen chipped in with 23, and Joe Denly contributed 29 not out, but England's total always looked on the low side and proved to be so.

Moeen was given out after a moment of uncertainty, as he clubbed Mitchell Starc towards the deep midwicket boundary where Steve Smith, with his left foot devilishly close to the boundary, held on.

Australia were 86-2 in 10 overs, looking for all the world comfortable, having lost only Matthew Wade (14) and Marcus Stoinis (26) to that point.

Yet Rashid had the tourists rattled when he took two wickets in three balls, nicking out Glenn Maxwell and Finch, the latter removed for 39 by a dream of a delivery that befuddled the Australia skipper.

The Yorkshire leg-spinner took his third wicket from the final ball of his permitted four overs, having Smith caught and bowled for three.

Marsh had crucially survived a scare between Rashid's second and third wickets, when he edged Denly towards Malan at slip and the England fielder missed the chance.

Australia needed 46 from 42 balls after Rashid's stint, with five wickets standing and Marsh and Ashton Agar at the crease.

England swapped spin for pace by summoning Jofra Archer and Mark Wood, and it was a change of tack that Australia welcomed, Marsh pulling Wood for six from the first ball of the 16th over.

The Australians gathered 14 runs from that over, thoroughly calming their nerves, and it was steady all the way to the finish line from there.