After India managed 278 in their first innings, England in reply were 25/0 at stumps on Day 3 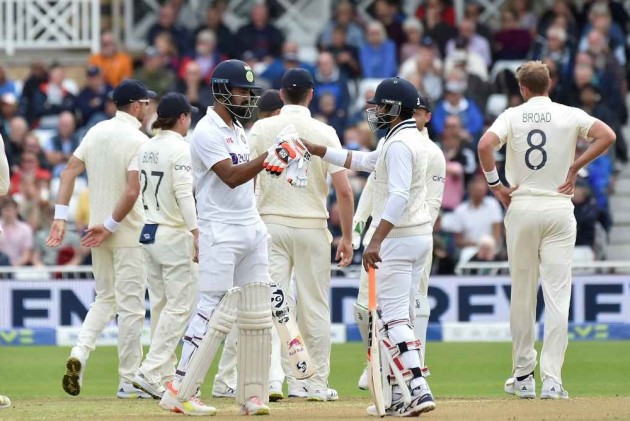 Ravindra Jadeja vindicated the team management's inspired call with a half-century, while KL Rahul made 84 before a wagging tail ensured a 95-run first-innings lead for India, even as comeback man Ollie Robinson kept England in the hunt with his maiden five-wicket haul in the first Test.Highlights | News

Courtesy Jadeja's 16th half-century -- a chiselled 56 off 87 balls -- and a 73-run contribution from the last three stands on the third day, India managed 278 in their first innings in reply to England's 183.

Robinson, who recently came back from suspension due to racism charges, bowled the hard lengths to pick up 5 for 85 in 26.5 overs, but James Anderson's 4 for 54 was, perhaps, more impactful in the context of the Indian innings.

On the day, Anderson became the third highest wicket-taker in Test cricket when he surpassed Indian legend Anil Kumble. Only Muttiah Muralitharan and Shane Warne remain ahead of Anderson now.

By the time rain robbed another full day's play, England openers Rory Burns (11 batting) and Dom Sibley (9 batting) had erased 25 runs out of the first innings deficit, but India still have their nose ahead going into the final two days of the game.

The chatter around all-rounder Jadeja being preferred over specialist off-spinner Ravichandran Ashwin would stop for the time being as the optimistic visitors focus on things more important to take them closer to victory and a 1-0 lead in the five-match series.

While opener Rahul laid the foundation for the visitors with a well-made 84, Jadeja snatched the initiative with his characteristic enterprise, hitting eight fours and a six, in his 56 off 86 deliveries at Trent Bridge.

With it, the lively cricketer has paid in full the faith the team management showed in him while making the big move to leave out the seasoned Ashwin from the playing XI at the expense of a man who can bat a little better than the off-spinner, who himself is no mug with the bat in cricket's top-flight.

The Indians were up to the task, especially the likes of Rahul and Jadeja, while Jasprit Bumrah (28) and Mohammed Shami (13) contributed useful runs, something that will not suffice for the flamboyant wicketkeeper-batsman, who fell prey to a trap laid by Robinson.

In that time, Jadeja's knock included a delectable back-drive off Sam Curran's bowling and an on-drive off Stuart Broad.

The Indian lead remained slender at lunch after England scored 183 on the first day, but it still gave India the psychological advantage as they tried to build on it.

It was another rain-hit day with the first 95 minutes featuring only 11 deliveries due to a steady drizzle.

However, Pant (25 off 20 balls) was ready to take off from where he had left in Southampton, during the World Test Championship final against New Zealand.

Just like at the fag end of the second day, the flamboyant left-hander charged down the track to hit Anderson for a boundary through cover region. The objective was to smother any outswing (Anderson's inswing) and reach to the pitch of the deliveries.

When Robinson dug one short, he played the hook shot while not being in control but the thick edge had enough power to carry it for a six.

Robinson knew that Pant was living dangerously and kept a short cover to lay a successful trap.

A length ball stopped as Pant committed on the drive without reaching to the pitch of the delivery and the short cover was in business.

Rahul, however, was unfazed as he played close to his body and left most of the deliveries on the fourth and fifth off-stump channel. But he did bring his cover drive out of the closet when he sent a Broad delivery to the boundary.