Root smashed 18 fours in his unbeaten 321-ball 180-run innings, his fifth century of the year, to anchor the England innings 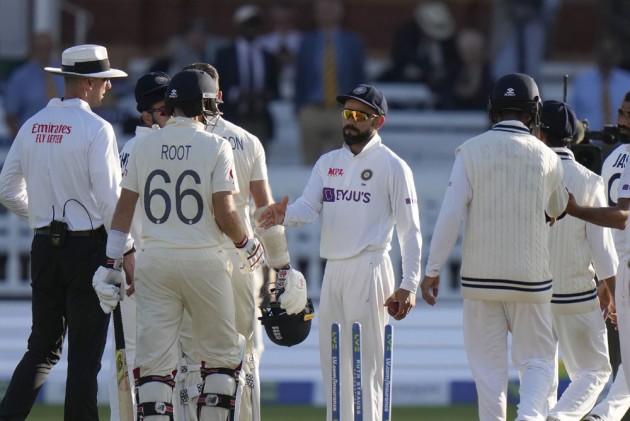 England captain Joe Root continued his dream run with an artistic 22nd hundred to ensure a morale-boosting first innings lead as the second Test against India is poised for an interesting finish in the next couple of days at Lord's, London.

Root (180 not out), who scored his second successive hundred of this series, took England from a position of weakness to strength with the first innings total of 391 after India scored 364 in their first essay.

More than the quantum of lead which stands at 27 currently, it is the psychological advantage that England gained after a poor first day which will put them in good stead as their bowlers would go flat out to dismiss the low on confidence Indian middle-order cheaply on the fourth day.

En route his 321-ball knock, Root became the first England captain to hit five hundreds in a season and also complete a personal milestone of 9000 Test runs while clinically annihilating the Indian attack which has till now failed to crack the 'Root Code'.

If these records were not enough, he is also now the first English captain with six 150 plus scores, a testimony to his knack of hitting 'Daddy Hundreds'.

His sequence of scores now reads 64, 109, 180* in this series. What makes him more special is the fact that he had made an attack, which otherwise gave a decent account of themselves, look pedestrian with his counter-punches that included 18 boundaries.

Mohammed Siraj (30-7-94-4) had the most number of wickets but bowled too many boundary balls in that first session along with Mohammed Shami (26-3-94-2), who would like to forget this innings in a hurry.

Old workhorse Ishant Sharma (24-4-69-3) once again did his part but at times looked tired in his later spells although the in-cutter that cleaned up Jos Buttler (23) would be any pacer's dream.

But England batting was all about Root and how he controlled the narrative with superb technique and the sublime range of strokes on the off-side.

Unlike India's tour of 2018, Root has now a reduced backfoot trigger movement and the front-foot rather than going across the off-stump moves a shade towards middle-stump. This slight tweak gives more chance of playing the drives through the off-side.

Jonny Bairstow (57 off 107 balls) did help him with a 121 run stand for the fourth wicket as the first session was a virtual nightmare for Indian bowlers.

Root's gameplan actually upset India's strategy as the first hour on third morning produced 54 runs with a flurry off boundaries coming off Siraj and Shami.

Kohli's decision to not start with Ishant or Bumrah first-up didn't help the cause as runs leaked easily in the form of cover and square drives and along with the whip through mid-wicket region.

It did help that the pitch was best for batting on the third day and Root wasn't going to let the chance of making merry go abegging on a sunny Saturday.

As many as 97 and 98 runs were scored in first two sessions, signalling the plight of the Indian bowling attack.

Root started the first session with a square drive off Siraj to reach his third successive fifty plus score in the series.

After a wicketless first session, India did enjoy some good moments when Siraj got Bairstow with a bumper and Ishant bowled Buttler but Moeen Ali was again given loose balls on platter as England closed in on the lead.

From 341 for 5, there was another lower-order slump which had England at 358 for 8 before Root played a flick off Siraj to give his team the lead.

And as if to celebrate, he played a reverse ramp shot off Siraj and then smote over mid-wicket to increase India's miseries.