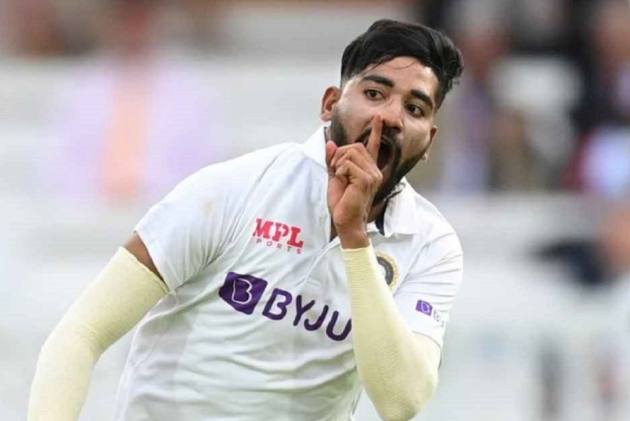 Mohammed Siraj is taking wickets and his new mode of celebration involves an underlying message for all his critics asking them to just keep shut. Day 3 Highlights | Scorecard | News

Siraj was the pick of the Indian bowlers with four wickets in his first appearance at the Lord's and was asked about his "finger on lips" gesture after getting each and every wicket.

So what's the back-story?

"This story (celebration) is for the haters (critics) because they used to say a lot of things about me, like he cannot do this and cannot do that. So, I will only let my ball do the talking and hence this is my new style of celebration," Siraj said at the virtual post-day press conference after the third day's play of the second Test.

Put into bat, India rode on KL Rahul’s classy 129 to post 364 in the first innings, but for England skipper Joe Root struck an unbeaten 180 to post 391 in their first essay and take a 27-run lead.

A bottle cork was hurled at Rahul on the third day from the spectators during the pre-lunch session, but Siraj said that he was unaware about it.

"I did not actually notice what happened but nothing (offensive) was said by the public," he maintained.

He said that the plan of the fast bowlers was to be consistent and bowl in one area.

He also underlined the importance of four fast bowlerss in these conditions.

"It was important (to play with fourth fast bowler), because we have taken three wickets at the start and our fast bowlers were effective and bowling consistently in one area.

"The role of fast bowlers is important in England because when you come to England, you want to try things, but our plan here was to be consistent and bowl at one place," he said.

Siraj also said his plan was to bowl consistently.

“When I played Ranji Trophy for first time, my plan was to hit consistently in one area, that is my simple plan not to try anything, if I would have tried more things, it could have affected the team, and my bowling figures,” he said.

The Indian bowlers conceded a lot of extras but Siraj said it was part of the game.

“What can I say about it (conceding extras), this happens, it is part of the game, extras, it is not that anyone has purposely conceded extras, it’s okay,” he quipped.

According to Siraj, Indian batsmen would look to score runs in the second essay.

“The wicket has become good for batting, and we will look to put runs on the board and try to score maximum runs and then see what happens after that,” he said.

Siraj removed a set Jonny Bairstow off a bouncer and the right-arm speedster revealed the strategy behind it.

“There was not help (from) the wicket, so we were planning like let's try bouncers, because after eight overs, we were going to take the new ball, so we planned to bowl bouncers. If the wicket comes, then we will keep the plan simple,” he signed off.