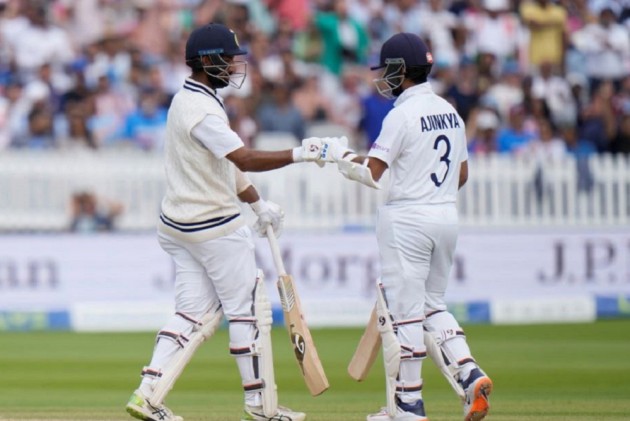 India vice captain Ajinkya Rahane on Monday dismissed criticism he and Cheteshwar Pujara faced for slow batting during the Lord's Test against England, saying they have played long enough to know what suits the team's interest. (More Cricket News)

Rahane even laughed off the flak they faced on social media by saying that only "important people" are talked about.

"I am happy that people are talking about me. I have always believed that people talk about important people, so I am not too concerned about that. It's all about contribution for the team," Rahane said ahead of the third Test, starting here on Wednesday.

Pujara took 35 balls to get off the mark at Lord's but his slow innings along with that of Rahane's eventually did not hurt India, with the visitors winning the match by a whopping 151 runs.

Rahane, in the context of the win, said that he was pleased with the way he played.

Asked about his discussion with Pujara in the middle, Rahane said it was all about hanging in there.

"The communication was all about short targets and build it on from there. Cheteshwar, we always talk that he plays slow but that innings was really important for us. He batted for 200 balls. We back each other.

"Cheteshwar and I have been playing since long, we know how to handle pressure, how to handle certain situations. Whatever we can't control, we are not thinking about that," he said.

The Headingley will be an unknown territory for the current Indian team since none of the players have the experience of playing there. But for Rahane, that is not something which is worrying the side.

"When you are playing in the UK, your line and lengths are very important and that's a challenge as a bowling unit. 2014 when we came here, we were a young unit, the guys were still learning. Now we are experienced.

"All the bowlers have played all over the world, they know how to bowl in ceratin situation. We focussed on bowling in right areas."

He said in England it's about finding your rhythm as a batsman and as a bowler.

"It's not challenging really. When you get the rhythm, it's about maintaining it and just being confident about yourself. I don't see any difficulty playing at Headingley.

"It's all in the mind, mentally we are strong. All the players are in good space."

The Lord's Test saw verbal duels from both sides. Asked if mental disintegration of rival players is important, Rahane did not agree.

"We are not thinking anything like that. For us it is important to stay in the moment. Whatever happened in last game we just have to forget and just take the positives. Every game is important due to the Championships (WTC)," he said.

Mohammed Shami and Jasprit Bumrah did the unthinkable when they added 89 runs for the unbeaten ninth wicket when India were reduced to 209/8. That stand took the game away from England.

"It does affect the batsmen. They keep thinking about their batting when 7-8 wickets fall. You can see they started practising shadow batting in slips, they start jumping (warming up), start doing foot work.

"This tail partnership mentally exhausts the batsmen. That was a good sign for us in last matches. Credit to them. They themselves want to bat after bowling, it feels good to know they want to contribute with the bat as well."

"He is ready for selection. We just have to see what combination we are going with. About rotation, we got very good break after the last Test so all the fast bowlers are ready to play, which is a very good sign," he concluded.