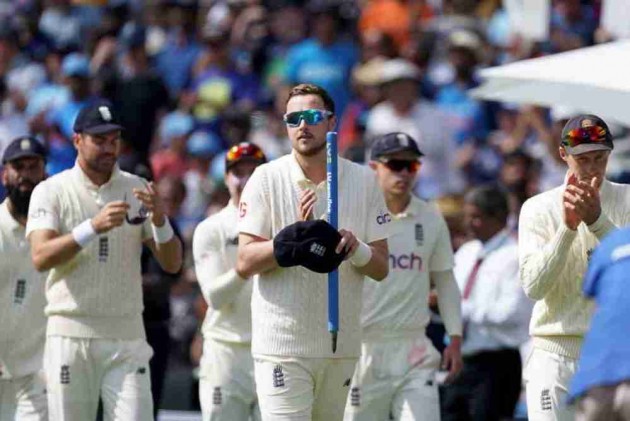 England pacer Ollie Robinson on Saturday said his legendary teammate James Anderson helped him in tweaking his wobble grip ball technique and it gave him a perfect result in the third Test against India. Highlights | Gallery | Scorecard | News

Robinson exploited the second new ball on the fourth morning en route splendid bowling figures of 26-6-65-5 as England drew level in the five match series with an innings and 76 runs win.

"I noticed Jimmy holding his wobble grip slightly differently. I was holding it from the other side so I spoke to him and just tried to practice it in the nets," Robinson told reporters after his man-of-the-match performance.

"It went quite nicely, so I tried it in the game and it worked quite well. It's something I need to practice a bit more. This learning opportunity is invaluable for me at this stage in my career and luckily it came off today."

"Obviously, it's great to open the bowling with Jimmy and build pressure on both ends. I enjoyed it and hopefully I can continue."

England began the proceedings with the second new ball and it all began with Robinson dismissing Cheteshwar Pujara on his overnight score of 91.

Out-of-form India skipper Virat Kohli got to his first fifty of the series but only to be dismissed by Robinson that triggered a stunning collapse.

"It feels like a very special day,  I don't quite feel like it's settled in yet. For me, it's one of the great days in my cricket career, to get my first Test win is really special."

On taking the prized scalp of Kohli, he said: "It is an amazing feeling. The crowds here were unbelievable. The noise when we got Kohli out was deafening, just an unbelievable experience and feeling to get that wicket."

Not long ago, the Sussex pacer had doubts over his fate in England cricket as he was suspended for offensive old racist tweets following his spectacular Test debut against New Zealand in June.

After his apology, the Sussex seamer earned a recall for the Trent Bridge Test where he grabbed his maiden fifer.

"It's off the back of quite a few hard years, I've had to work hard to get here and do a lot of extra to get here so to get the rewards in the last four four Test matches has been very pleasing," the 27-year-old said.

"When you are performing obviously the scrutiny is off you a little bit. It (the racist tweet episode) is still quite fresh in my memory and I'm trying to work on becoming a better person."