England Vs India, 5th Test: Due To COVID-19 Scare Manchester Match Called Off

The fate of the series remains undecided as of now. The fifth Test may be played at a later date. The Indians will get busy now with the remainder portion of IPL 2021 starting in the UAE from September 19. 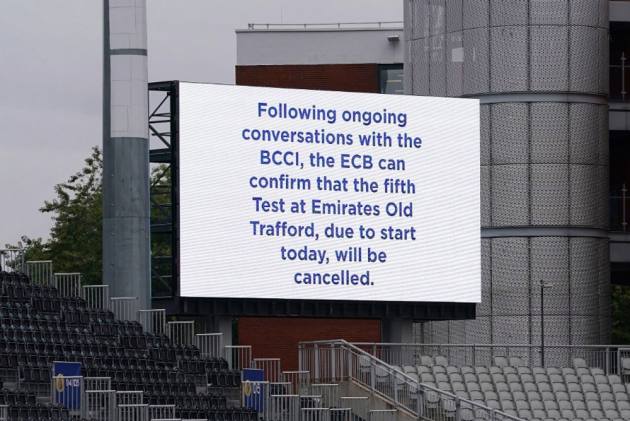 The fifth and final cricket Test between England vs India has called off. The match at Old Trafford was to start today (Friday) but first it was deferred by a couple of days and then finally cancelled. Having won the fourth Test at The Oval last week, India were ahead 2-1 in the series. (Stats Preview | News)

The fate of the series remains undecided as of now. The fifth Test may be played at a later date. The Indians will get busy now with the remainder portion of IPL 2021 starting in the UAE from September 19.

According to well-placed sources, the entire Indian cricket team is having a second round of RTPCR tests on Friday. Results are expected late in the evening, UK time. This is to ensure that the players are completely safe and don't spread the COVID-19 virus.

The decision to cancel the match was taken after hectic parleys by the officials of the Board of Control for Cricket in India (BCCI) and the England and Wales Cricket Board (ECB). There were doubts about the match since Thursday.

Following ongoing conversations with the BCCI, the ECB can confirm that the fifth LV= Insurance Test at Emirates Old Trafford, due to start today, will be cancelled.

"Due to fears of a further increase in the number of COVID cases inside the camp, India are regrettably unable to field a team," the ECB said in a statement. "We send our sincere apologies to fans and partners for this news, which we know will cause immense disappointment and inconvenience to many."

Meanwhile, the BCCI said that "the well-being of the players is of paramount importance and there will be no comprise on that aspect."

"The BCCI and ECB held several rounds of discussion to find a way to play the Test Match, however, the outbreak of Covid-19 in the Indian team contingent forced the decision of calling off the Old Trafford Test Match.

"In lieu of the strong relationship between BCCI and ECB, the BCCI has offered to ECB a rescheduling of the cancelled Test match. Both the Boards will work towards finding a window to reschedule this Test match.," BCCI said in a release.

On Thursday, the Indian team went through a round of RTPCR tests after a support staff -- physio Yogesh Parmar -- tested positive for COVID. All tests returned negative.

The negative tests of all 21 players increased the chances of the match at Old Trafford going ahead even though concerns remain. But it was widely reported that objections of "one senior player" triggered uncertainty in the Indian camp.

"All the players have tested negative and that's the good news. But let's keep our fingers crossed that the match would go ahead," PTI reported quoting a senior BCCI source on Thursday.

This was after it came to light late on Thursday evening that the Indian contingent had gone into a huddle after the senior cricketer voiced his concerns about the situation becoming worse if a playing member tested positive on one of the match days.

But as things stand now, the match will start on Sunday.

Earlier, Parmar's positive COVID-19 report had prompted BCCI president Sourav Ganguly to admit that there was uncertainty around the Test.

After head coach Ravi Shastri and bowling coach Bharath Arun, another member of the support staff testing positive forced the team to cancel its practice session on Thursday.

"We don't know if match will happen at the moment. Hopefully, we can get some game," said Ganguly.

There were also reports that the ECB proposed that India forfeit the match in case reports of the players come out positive. However, India had turned down the idea.

Parmar testing positive leaves the team without a physio with the main physio Nitin Patel already is in isolation after Shastri contracted the virus during the Oval Test.