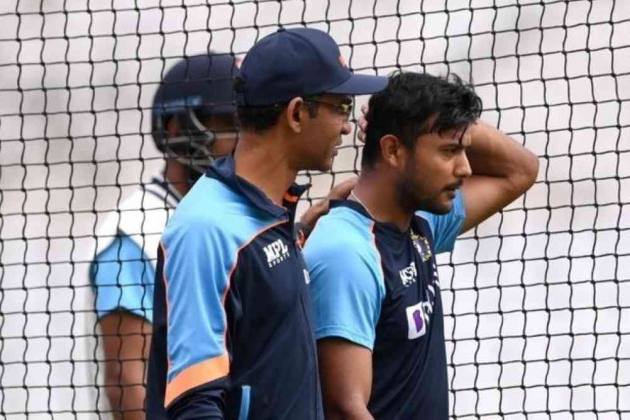 India's opening batsman Mayank Agarwal was on Monday ruled out of the first Test against England after being concussed by a short ball from teammate Mohammed Siraj during a training session in Nottingham. (More Cricket News)

While facing Siraj, possibly the fastest bowler in the current Indian line-up, Agarwal saw the ball thudding into his helmet when he took his eyes off a short delivery. The first Test starts here on Wednesday.

"Opening batsman Mayank Agarwal was hit on the helmet while batting during India's nets session at Trent Bridge in Nottingham on Monday," BCCI secretary Jay Shah was quoted as saying in a media release.

"The BCCI Medical Team assessed him, and a concussion test was conducted. He has shown signs of concussion and is ruled out of the opening Test against England. The 30-year-old is stable and will remain under close medical observation," Shah further stated.

When vice-captain Ajinkya Rahane was asked about the fitness of all players, he did say that Agarwal sustained a head injury.

"Mayank Agarwal got hit on the head. The medical team is looking after him. All others are fit," Rahane told mediapersons.

After being hit by Siraj's delivery, Agarwal was seen in some discomfort as he removed the helmet and sat on the ground with physio Nitin Patel attending to him.

He was then seen pressing the back of his head while leaving the nets, escorted by Patel.

KL Rahul, who has mostly opened in Test matches but prefers a middle-order slot these days, could be asked to face the new ball first up in the absence of Agarwal.

The other option is Bengal opener Abhimanyu Easwaran.

A left field selection could be Hanuma Vihari, opening the innings, like he did in Australia.

In case Vihari opens and bowls his off-spin, seamer all-rounder Shardul Thakur could also be considered for selection.