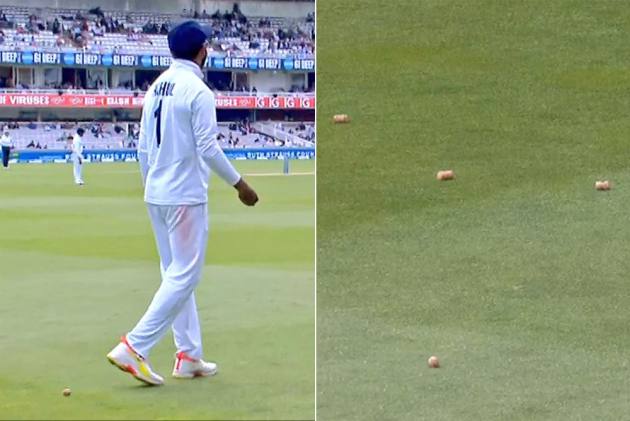 Lord's, the spiritual home of cricket, witnessed rowdy fans throwing bottle corks at KL Rahul during the pre-lunch session on the third day of the second Test between England and India in London on Saturday.

Rahul, who scored a sublime 129 in the first innings, was seen with an object that looked like a champagne bottle cork during the 69th over, bowled by Mohammed Shami.

Then, images of more such pictures flooded social media. In one post, an animated Indian skipper Virat Kohli was seen purportedly instructing Rahul to throw it outside.

Think India have complained to the umpires about the champagne cork that was thrown at KL Rahul.

Cork thrown at KL Rahul. Absolutely uncalled for @HomeOfCricket . This series has been played in the right spirit so far. #ENGvsIND

Crowd threw something on the ground where KL Rahul is standing !

The game was briefly halted as Indian players were seen talking to umpires Michael Gough and Richard Illingworth. But it couldn't be confirmed whether this was just about an informal way of drawing the umpire's attention or a formal complaint.

Earlier this year, the Indian team faced racist taunts during their tour of Australia where Mohammed Siraj was abused and that led to the eviction of spectators from the Sydney Cricket Ground during the New Year's Eve.

In fact, the Indian team had lodged an official complaint with match referee David Boon back then, who had given them an option to walk out.