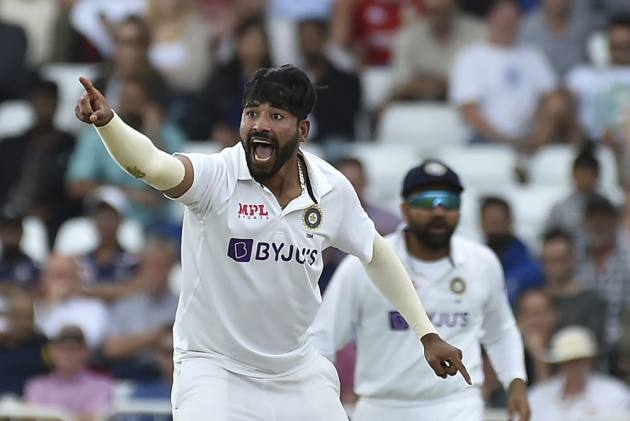 Dinesh Karthik feels Mohammad Siraj's act of shushing Jonny Bairstow after getting the England batsman out in the first Test was unnecessary and that is something the India pacer will learn as he progresses in his promising international career. (More Cricket News)

Siraj was aggressive with his celebrations and was involved in exchanges with the batsmen multiples times in the drawn Test.

"I do feel it was unnecessary for Siraj to shush batsmen after dismissing them. You have already won the battle, why resort to this? That's one learning for Siraj early in his international career," Karthik, who is commentating on the series, wrote in The Telegraph.

"How many of us would have imagined Virat Kohli stepping in to calm an excitable team-mate down? Much to everyone's amusement, the mercurial Indian captain was forced to act swiftly at Trent Bridge to ensure Mohammed Siraj didn't cross the line.

"I love the brand of cricket portrayed by this team. Players are unafraid to engage their opponents in verbals, like Siraj and KL Rahul did. This is new-age India, armed with the license to bring out its personality.

Karthik, who will turning up for Kolkata Knight Riders in the IPL next month, said there are different ways one can be aggressive.

"Aggression manifests itself in different ways. For some like Virat, Siraj and Rahul, it could be open and in-your-face. I can't see senior batsmen Rohit Sharma, Cheteshwar Pujara and Ajinkya Rahane singing that tune, but that doesn't mean they aren't aggressive."

"Strangely enough, most of India's quicker bowlers steer clear of physical aggression. They prefer getting the job done with the ball, which is just fine. The primary reason India have started travelling better is the arsenal of pace Virat is able to summon.

"India have conquered Australia twice in a row; England now, and South Africa later in the year, offer further opportunities to reinforce their credentials as an excellent ‘away’ side."

From the sidelines, Karthik has seen that India are only here to win the five-match series.

"What makes this series fascinating is that India have, with their body language and aggression, made it clear they are here to win. England, even with all their frailties, are one of the hardest teams to defeat in their own backyard.

"With London expected to be warm over the next five days, things are set to get hotter, especially if Ravi Ashwin is back in the mix as I expect," he added.