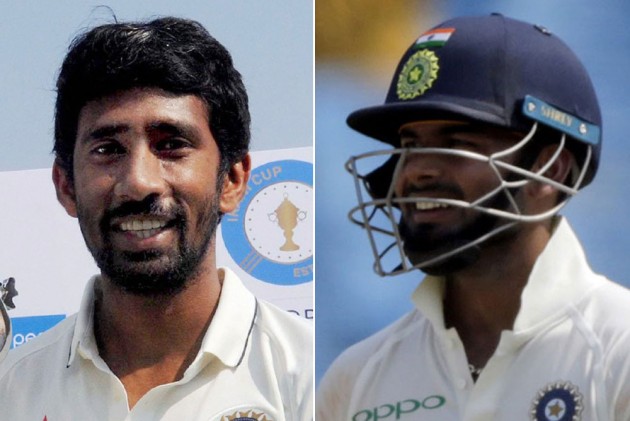 Wicketkeeper-batsman Rishabh Pant and throwdown specialist Dayanand Garani tested positive for COVID-19, while three others were placed in precautionary isolation as the dreaded virus hit the Indian cricket team ahead of next month's Test series against hosts England. (More Cricket News)

Bowling coach Bharath Arun, reserve wicketkeeper Wriddhiman Saha were put in isolation for having come in contact with Garani along with standby opener Abhimanyu Easwaran, whose inclusion had raked up a recent storm. Garani's COVID report came this morning.

It is learnt the Arun, Easwaran and Saha have all tested negative but have to follow the UK Government's Health Safety Protocol.

All five are currently in London while the rest are reaching Durham this evening after reassembling from a 20-day break. London to Durham is a five-hour bus journey.

Pant and Saha could both miss the practice match scheduled to start on July 20 against a combined county side. In that case KL Rahul will keep against Combined Counties.

A BCCI source confirmed that Pant has been in isolation for the past eight days. He is, according to the source, asymptomatic at this point.

"He is in quarantine at an acquaintance's place and won't be travelling with the team to Durham on Thursday," he said without divulging when the 23-year-old will join the squad.

However, he is likely to undergo a COVID-19 test in the next couple of days.

The rest of the squad, sans Pant and the injured Shubman Gill, left for Durham on Thursday from London.

Gill had sustained a leg injury earlier this month and the young batsman had left the team's bio-bubble.

The development comes close on the heels of BCCI secretary Jay Shah sending an e-mail to the Indian contingent, warning it about the rising cases of COVID-19 in the United Kingdom.

The break was given to the players after the World Test Championship against New Zealand, which the team lost last month.

"Yes, one player has tested positive but he has been in isolation for the last eight days. He was not staying in any hotel with the team, so no other player has been affected," BCCI Vice President Rajiv Shukla told PTI.

"As of now no other player has tested positive. Also you must be aware our secretary Jay Shah has written a letter to all players to maintain protocols," Shukla added.

It is understood that Pant has been afflicted by the Delta variant which has led to rising number of cases in England.

He was seen attending a Euro championship match last month and had even posted pictures on his social media accounts.

He underwent a test after experiencing low grade fever.

Shah, in his letter, told the players to "avoid" crowded places as Covishield, the vaccine which has been given to the team, only provides protection, not full immunity against the virus.

In fact, Shah's letter had specifically stated that players should avoid going to the Wimbledon and Euro Championships, both of which recently concluded there.

The Indian team is due to take on England in a five-match Test series starting August 4. It will play a practice game starting July 20 as a build-up to the high-intensity series.

The India-England showdown marks the beginning of the second cycle of the World Test Championship.

Recently, the England team too was hit by the virus and was forced to field an altogether different XI in a limited-overs match against Pakistan.