Mark Wood and Ollie Robinson led England's fightback, but Devon Conway made history with a double century on his Test debut 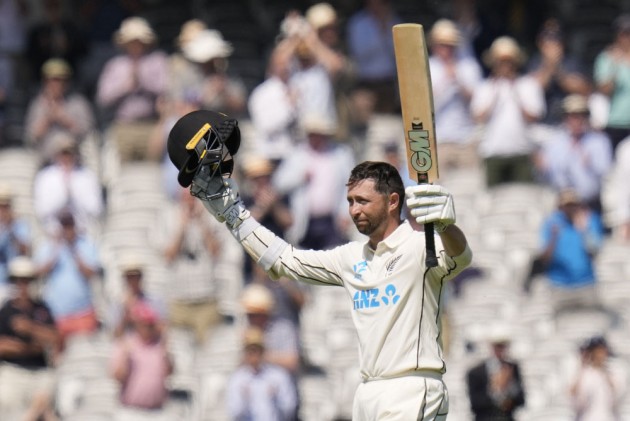 New Zealand's Devon Conway put himself into the record books with a double hundred on his Test debut, though England got themselves back into contention at Lord's.

Mark Wood (3-81) and England debutant Ollie Robinson – who came into the second day on the back of issuing an apology for offensive historic social media posts – managed to wrestle the hosts back into the fray after the tourists closed on 246-3 on Wednesday.

Robinson finished with impressive figures of 4-75 and would have had a five-for on debut if not for Stuart Broad dropping Tim Southee's drive.

Yet the day belonged to Conway, who brought up his 200 with a six before succumbing to a strange run-out in the Black Caps' 378 all out, with England surviving a nervy start to reach the close on 111-2.

Starting the day on 136 not out and, along with Henry Nicholls (61), New Zealand's opener picked up where he left off and, when he hit 154, had surpassed legendary figures WG Grace and Ranji to establish himself as the highest scoring Test debutant on English soil.

Wood delivered in his second over, a bouncer drawing Nicholls into a miscontrolled hook to Robinson, and the paceman soon had his second and third wickets, dismissing BJ Watling and Mitchell Santner either side of Robinson trapping Colin de Grandhomme lbw.

Kyle Jamieson followed to Robinson after lunch as the Black Caps lost a fifth wicket within the space of 29 runs, though Conway trundled on and, amid a late flurry from Neil Wagner, the 29-year-old got his 200 when a top edge soared over the deep square leg boundary.

Conway's record stand came to an end in bizarre circumstances. Joe Root seemed to have let the opportunity for a run-out slip by when he missed the stumps after collecting Ollie Pope's throw, yet England's captain recovered just in time to knock the bails off before Conway made it back.

In reply, England were a wicket down inside four overs. With Southee having an lbw appeal against Rory Burns rightly turned down, Jamieson struck when Dom Sibley (0) was hit on the pads just in line with off stump.

Zak Crawley edged through to Watling as fears of another batting collapse grew, but Burns and Root steadied the ship, reaching unbeaten tallies of 59 and 42 respectively before stumps.

There can be no full house just yet at the home of cricket, but the Lord's crowd were treated to a masterclass of an innings by Conway, who became just the second Black Caps batsman, after Matthew Sinclair in 1999, to score 200 on his Test debut, and just the seventh player ever to score a double century on his first appearance in the longest format.

Conway is the oldest player to hit 200 on his Test debut, and his runs accounted for 52.91 per cent of New Zealand's first-innings total.

Wednesday was a difficult day for Robinson, on what should have been a proud moment for the seamer.

He can at least take pride in what was a resilient response, and if not for Broad's dreadful spill from Southee's shot, Robinson would have had a five-for. It would also have matched a unique statistic, as only once previously in Test history have a century and a five-for been recorded by debutants in the same innings, with Harry Graham (107) and Bill Lockwood (6-101) doing so at Lord's in 1893.