Tim Southee claimed six wickets to help New Zealand dismiss England for 275 in their first innings. Kiwis will resume Day 5 with a 165-run lead at Lord's 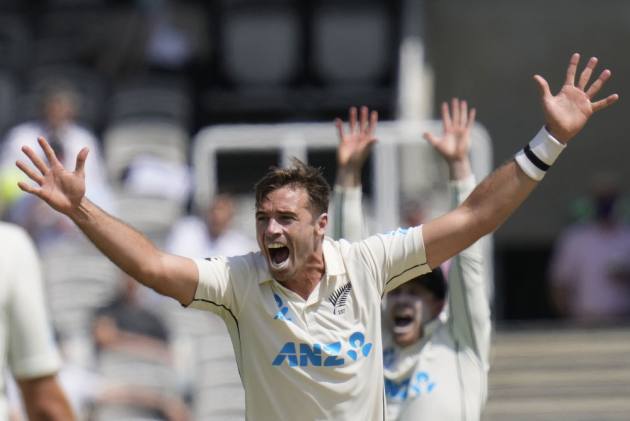 Experienced New Zealand pacer Tim Southee says his team has not given up hopes of an outright win despite losing the third day of the opening Test against England due to rain in London. (More Cricket News)

Southee (6/43) claimed six wickets spread over two days to dismiss hosts England for 275 in their first innings just before tea on Saturday.

"Losing yesterday doesn't help, but there's 98 overs tomorrow (Sunday) and it's always great to turn up on the last day with all results possible. Who knows what may happen but it's great to be in a position where we can push on," Southee was quoted as saying by ESPNcricinfo.

"You play to win Test matches for your country and a Test win at Lord's would be pretty special, so I'd imagine we'll chat overnight, get together as a side and come up with a plan for day five."

Southee found his name on the honours board at Lord's for the second time after his stupendous effort with the ball. His pace colleague Kyle Jamieson too chipped in with three wickets on Saturday.

"Yeah, with the wicket of Joe Root from the first ball of the day, we probably couldn't ask for a better start," Southee said referring to fellow pacer Kyle Jamieson's dismisal of the England skipper.

"It was a dream start to take those early wickets but we knew there was going to be a counterpunch from England at some stage, they're too good a side just to roll over."

"Their lower order, especially Robinson, played a nice hand there, and Jimmy hanging around with Burns at the end, putting on over 50, blunted our attack towards the end," Southee said.

"But I think if we'd turned up at the start of the day and been told we're gonna walk off in the position we're in now we'd have been pretty happy."

New Zealand could have been in a better position if they hadn't missed a stumping chance when Burns was on 77 and dropped a catch at slip on 88.

"Ideally you want to take those chances; games don't always pan out perfectly the way you want them to," Jamieson said.

"I certainly don't believe that there's time taken from the game in terms of us not being able to push for a win. We're still ahead in this game.

"I guess we have the ability to control how this game is set up in the first session tomorrow and probably having that rest on day three, everyone's ready to go for tomorrow and we'll certainly push for a win, that's for sure."

Jamieson, who is playing only his seventh Test and first outside New Zealand, said it is a matter of few good sessions on day 5.

"It's a couple of sessions and there's a Test victory on the line, I have no doubt that all of us will be pushing as hard as we can and just see that we get through," he said.

"There's nothing guaranteed if you bring that attitude but without a doubt we'll certainly be bringing that, that's for sure."