As Lord's prepares for an abundance of aggression in the Cricket World Cup final, the two leading men at the eye of the storm – Eoin Morgan for England and Kane Williamson for New Zealand – exude calm 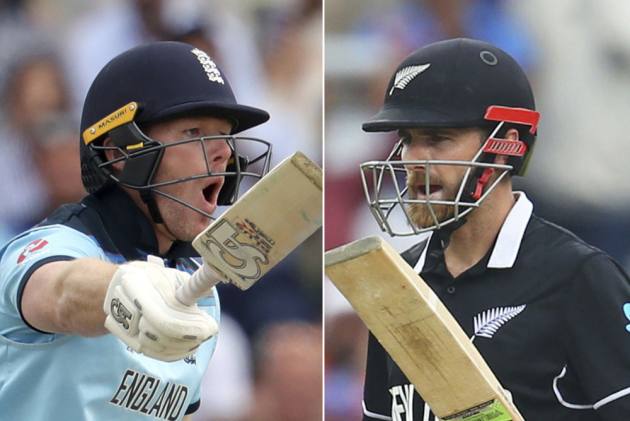 When England and New Zealand met in the Cricket World Cup four years ago, Eoin Morgan and Kane Williamson had little influence upon the direction of an explosive contest.

Williamson dutifully compiled an unbeaten nine from 22 balls after a Brendon McCullum shellacking effectively ended the contest before he was called upon.

A year later, when McCullum stepped aside, Williamson took the reins as skipper of one of the most exciting sides in world cricket, ready to repeatedly make his mark.

Also Read: Five Players To Watch Out For

The main problem for Morgan in being at the mercy of an eight-wicket defeat with 226 balls to spare, with no discernible means of turning the tide at any stage, was him already being the England captain.

Morgs way – tearing up the script of failure

Previously a freewheeling trailblazer of a batsmen – a contemporary cricketer as his adopted nation struggled frequently and embarrassingly with the realities of the modern limited-overs game – Morgan was appointed two months ahead of an England World Cup campaign doomed to shambles.

His innovative, 360-degree strokeplay disintegrated into 90 runs across five innings during an ignominious group-stage exit.

Morgan was unable to stitch up reopened wounds from previous failures but, in tandem with Paul Fabrace and Trevor Bayliss, he ensured those scars would not be his own.

This England, Morgan's England, would play in their captain's image. A rollercoaster series against McCullum's New Zealand was the launchpad for a fearless approach where wickets lost or runs conceded were not to temper ambition.

Where previous captains unsuccessfully begged team-mates not to go into their shells, England version 2.0 had a skipper for whom shackles had always been there to break. Morgan was a leader by example, first and foremost.

series wins in a row pic.twitter.com/Ls160EldQA

While McCullum's aggressive leadership had roots in his bludgeoning shot-making, Williamson the skipper instantly appeared every bit as shrewd and calculated as his unfailing deflections down to third man.

The Black Caps won four consecutive matches in India before a semi-final loss to England. Williamson led them superbly on the sort of slow, turning pitches they had previously struggled to negotiate.

Morgan grabbed the headlines with a record-breaking century against Afghanistan during the group stage of this World Cup, smashing a remarkable 17 sixes.

It was a desert island innings – the sort of performance you might pick as the one piece of cricket viewing to keep you sustained in isolation. Williamson's knocks do not usually fall into that category, although he is the batsman you would pick to make runs in any conditions if your life depended on it.

His only score below 40 in the tournament came when Mark Wood deflected a drive fortuitously back onto the stumps at the non-striker's end when the finalists met during the round-robin phase.

That body of work includes two centuries and a pair of fifties, the latter of which – a perfectly judged 67 against India as the roof appeared to be falling in on New Zealand's sodden Manchester semi-final – made a place at Lord's possible. Williamson is a sure thing.

England do not rely on the mercurial Morgan to the same extent. But whether Jofra Archer is tormenting opposition batsmen with laser-guided aggression, Jason Roy and Jonny Bairstow are ruggedly disassembling the opposition attack or Adil Rashid and Liam Plunkett are bending the middle overs to their will, everything England do at their best takes its cue from his planning and calm conviction.

Respect is hard earned. There has to be a winner and there has to be a loser. It’s how you carry yourself after both and when your emotions are raw that define you as a person and distinguish your character from others. Much love for both these men. Humble in success and gracious in defeat. Perfect guardians of this great game of ours. â¤ï¸

Stepping out at Lord's on Sunday will feel sweeter for two steely competitors who know they had to tackle adversity to get there.

The group-stage wobble of back-to-back defeats against Sri Lanka and Australia saw England's approach and their captain's stomach for the fight questioned. At a crossroads, Morgan doubled down and the hosts took apart the three best teams in the competition one after the other.

Although it felt more measured than Kevin Pietersen's social media yapping about Morgan, former Australia captain Michael Clarke and McCullum both wondered aloud whether Williamson was too conservative a leader for a country whose recent successes came on the front foot.

When it mattered most against India, the 28-year-old judged everything impeccably, never missing a beat in a game that pulsed with tension.

The influence of their 2015 mismatch upon New Zealand and England's respective directions of travel since has been well documented but this time, far from being swept along in the noise and confusion, Morgan and Williamson's fingerprints will be all over every moment of this Lord's showdown.

It will be a triumph hard-earned and richly deserved when one side lifts the trophy they both desire most.