England was only 37 runs ahead at stumps with tailenders Olly Stone, 15 not out, and last man James Anderson, yet to score, in the middle. 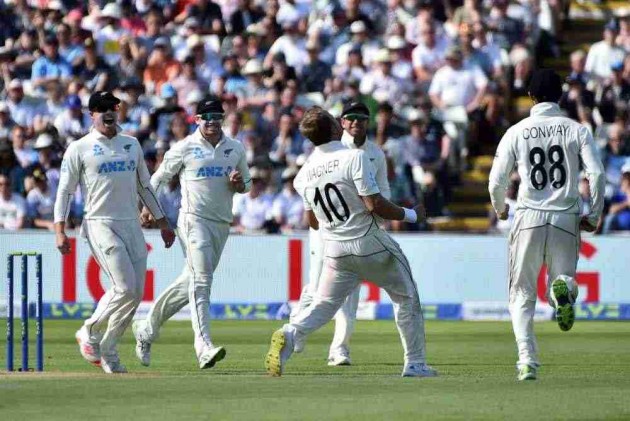 New Zealand was within grasp of a first test series win in England since 1999 after the home side collapsed in its second innings to 122-9 at Edgbaston on Saturday.

England was only 37 runs ahead at stumps with tailenders Olly Stone, 15 not out, and last man James Anderson, yet to score, in the middle.

Sunday will mark the fourth morning of the second test when New Zealand should achieve the milestone win and a 1-0 series triumph. It will also give the Kiwis an extra day of rest before the world test championship final against India starting on Thursday.

The Black Caps' first innings finished before tea on 388 for a lead of 85.

But in the six overs to the break, both England openers edged to the slips off fast bowler Matt Henry. Rory Burns went second ball of the innings for a duck, and Dom Sibley was out for 8.

Henry also got the next wicket after tea, trapping Zac Crawley on 17 at 30-3.

Neil Wagner, auditioning along with with Henry to play India in the final, got Ollie Pope lbw for 23 and Dan Lawrence caught behind for a duck in two overs.

Spinner Ajaz Patel chipped in with James Bracey, who tried a paddle sweep and exposed his wickets, and got the last recognized batsman, Joe Root, after the captain looked at 61 balls to make 11.

England was 76-7 and its embarrassment in danger of sinking to an innings loss.

Mark Wood delayed the inevitable with a 38-ball 29 before becoming Wagner's third wicket, and Trent Boult bowled Stuart Broad on 1, but Stone and Anderson held on for one more over to force a fourth day of play.

Still, England is set to lose a home test series for the first time since 2014.

England's limp batting undid all of the good work by the bowlers to restrict the Black Caps' first innings to 388.

New Zealand resumed the day on 299-3 and Ross Taylor went from 46 to the verge of a 20th century but he nicked Stone behind on 80.

The innings, which threatened to go past 400, fell away with Wood and Broad grabbing a couple of wickets each. New Zealand went from 312-4 to 388 all out.