New Zealand believed in their ability and Daryl Mitchell played an exception knock to throw England out of the T20 World Cup in Abu Dhabi. 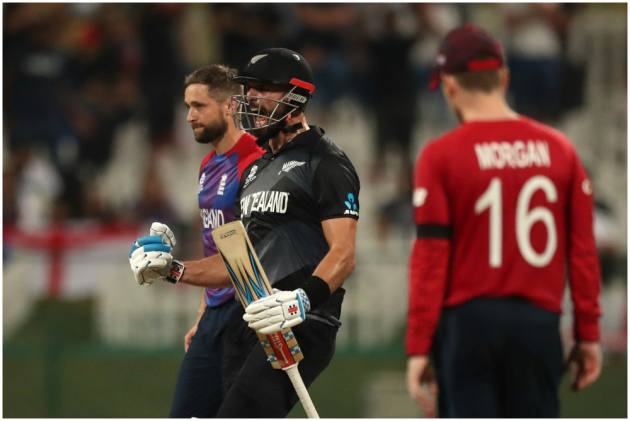 In spite of being under pressure in the middle overs, New Zealand muscled back and outplayed England to storm into their maiden finals of the ICC Men’s T20 World Cup.

For anyone who watched the 2019 ODI World Cup can understand the emotions, New Zealand dugout felt when Daryl Mitchell cleaned the boundary off Chris Woakes on the last ball of the penultimate over. (ENG v NZ HIGHLIGHTS)

It was the pure class with a cheeky wink by Mitchell Santer at the non-striker’s end. The pain of losing the finals against England on boundary count back at Lord’s in July 2019 finally ended at Zayed Stadium, Abu Dhabi in 2021. England were quite in the game, perhaps controlling the proceedings until Jimmy Neesham hammered Chris Jordan in the 17th over.

Jos Buttler, in the absence of his regular opening partner Jason Roy, couldn’t give England the ideal start in the powerplay overs as everyone was expecting from him. Moeen Ali and David Malan, however, steadied the English ship to post 166 for the loss of four wickets.

"Yeah, we're devastated. To be on the wrong side of a close game is not easy to take. I thought we fought unbelievably well today on a wicket that didn't necessarily suit our batting, but we managed to post in and around a par score. We were brilliant with the ball,” said England captain Eoin Morgan after losing to New Zealand by five wickets.

Chris Woakes gave England an upper hand in the powerplay overs after getting rid of dangerous Martin Guptill and Kane Williamson. But then what went wrong with the Eoin Morgan-led side?

Here are the five things that went wrong for England:

No doubt the match was a tightly contested affair, with New Zealand taking the game deep. But the absence of Jason Roy, who was ruled out due to a calf injury, was felt by his opening partner Jos Buttler. England opening duo of Roy and Buttler worked in tandem throughout the group matches but Roy’s injury handicapped Buttler, who couldn’t attack much as he would have wanted to.

Moreover, the absence of Tymal Mills, who suffered a thigh injury, from the bowling department took a toll on England. The left-arm fast bowler was brilliant with his line and length and had become his captain’s go-to bowler to put pressure on the opponents. But he was ruled out of the tournament just ahead of their last group game.

“I don't think you can put a measure on missing a player. I think the 11 guys that took the field today gave absolutely everything. I'm extremely proud of the performance that they put in. When you play really well, it doesn't always guarantee that you win games. Unfortunately, we found ourselves on the wrong side of a really tight game today,” Morgan said.

Jimmy Neesham’s 11-ball 27, which saw three maximums, actually turned the game New Zealand's way. At a strike rate of 245.45, the left-hander tilted the course of the match which was until the 17th over in favour of England. Neesham picked up English pacer Chris Jordan and spinner Adil Rashid, stealing 37 runs before he slapped Rashid straight into the hands of Morgan at covers. Neesham’s departure brought no good news for England because the damage was already done.

“I think it was a very closely fought game right throughout. I thought Jimmy Neesham was probably the only guy that came out and was showing the ability to strike the ball cleanly from ball one,” Morgan said.

“We were right in the game probably until Jimmy Neesham came to the wicket, if not ahead of the game. I think throughout those innings everybody struggled to clear the ropes on both sides, and I think that was just the nature of the pitch. So yeah, you have to take your hat off to him. He played really well. Everything worked right up until the point that Neesham came in. It's a fantastic cameo in, I suppose, high-pressure circumstances when his team needed it,” Morgan said. 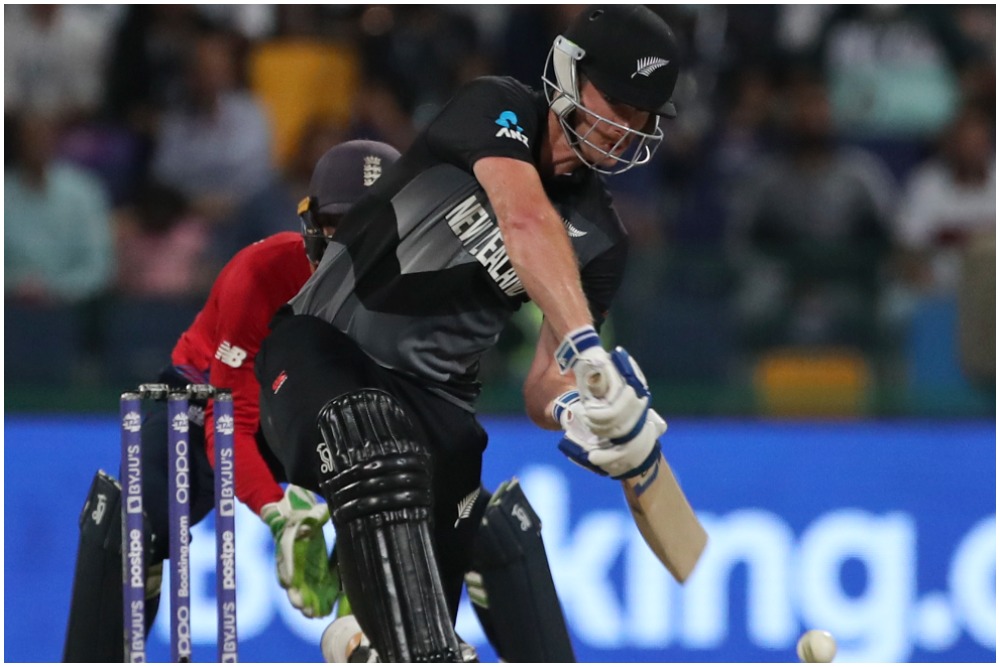 Mitchell became New Zealand’s hero overnight after he guided the Kiwis home. The right-hander timed the ball beautifully, with his 47-ball 72 not out. When New Zealand lost the two big names — Martin Guptill and Kane Williamson — it was Daryl Mitchell who settled in quickly to take the game deep with Devon Conway. New Zealand lost Conway halfway through the innings, putting pressure on Mitchell. However, Mitchell took the onus and signed off for the day with a welcoming boundary.

England captain Eoin Morgan heaped praises on Daryl Mitchell and said, “Yeah, he played really well. I haven't played with him. I was there in the crossovers and the changing room when he arrived (at Middlesex). He's a lovely guy who has developed a little later than most international cricketers, I'd say, so he's played a hell of a hand today. He's played really well against the No. 1 side in the world and taken his side right to the final. Yeah, well played.”

The 17th over bowled by Chris Jordan turned out to be the turning point in the match. The pacer bowled short balls and Jimmy Neesham replied in sixes. It was surprising to see Jordan, who conceded 23 runs in the 17th over, under pressure in death overs. And if there was one man who really enjoyed it was Neesham, whose cameo with the bat led to jubilation in the New Zealand dugout.

However, England captain Eoin Morgan defended Chris Jordan, saying, “Yeah, I think bowling to the short side is never easy. We've played against Jimmy a lot. He's not struck the ball like that against us ever. It's really good batting”. 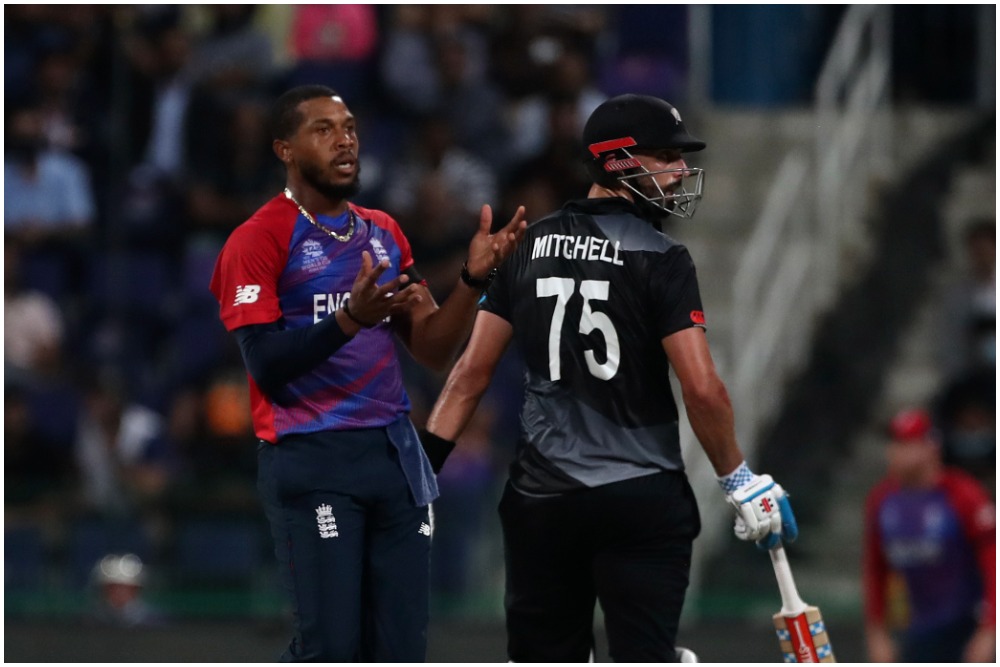 England entered the T20 World Cup without their 2019 ODI World Cup star players — Ben Stokes and Jofra Archer. Stokes was not available for selection as he was on an indefinite break from all forms of cricket to prioritise his mental well-being and rehabilitation after he had injured his left index during the IPL in April.

And Jofra Archer had been ruled out for the entire year after he suffered a recurrence of a stress fracture of his right elbow. The fast bowler is spending time on an extended break from cricket. The absence of Stokes and Archer from the line-up was quite visible for the 2019 ODI World Cup champions.