Pakistan lost opener Shan Masood early as the visitors got off to a nervous start in the second Test against England at the Rose Bowl on Thursday. Here's Day 1 report at Lunch 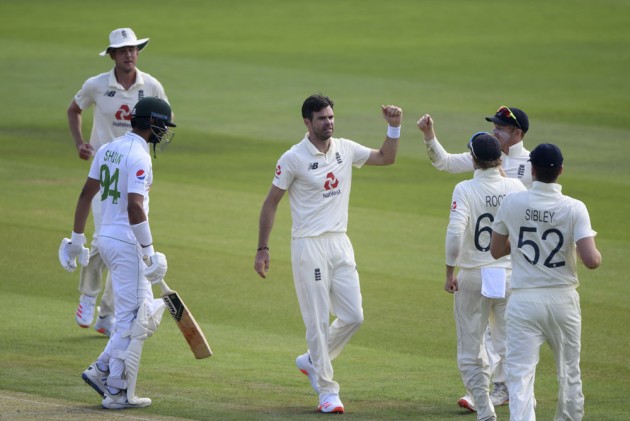 Pakistan rode their luck after the loss of opener Shan Masood and reached an early lunch at 62/1 against England on the first day of the second Test in changing conditions at the Rose Bowl on Thursday. (More Cricket News)

Jimmy Anderson trapped Masood LBW off the 14th ball of the innings to leave Pakistan on 6/1, and England seamers kept the pressure on in the opening session after being made to bowl first under overcast skies.

Abid Ali was dropped twice in the slips, firstly by Dom Sibley at third slip on 0 and then Rory Burns at second slip on 21. He also was rapped on the box off a delivery from Chris Woakes to survive on 33.

Captain Azhar Ali, in need of runs after making only 139 in his last 12 away test innings, was on 20 by the time rain fell 10 minutes before the end of the session — prompting the umpires to call an early lunch.

Anderson, who kept his place despite bowling poorly in the first test won by England by three wickets last week, had 1-15 off seven overs in a return to form.

Pakistan won the toss under sunny skies, which turned gray by the time play began before a shower forced the stoppage nearly two hours later.

England dropped paceman Jofra Archer and chose Sam Curran ahead of Mark Wood as the replacement in a selection that gives more length to the batting department. Batsman Zak Crawley replaced allrounder Ben Stokes, who has returned to New Zealand for family reasons and will also miss the third test.

Pakistan's only change saw Fawad Alam come in — for his first test appearance for 11 years — as an extra batsman at the expense of allrounder Shadab Khan, who was utilized for only 11.3 overs across the two innings in the three-wicket loss in Manchester last week.

Another victory for England will clinch a first test series against Pakistan in 10 years, and a second series of this pandemic-affected summer having already beaten the West Indies.