Adil Rashid took four wickets for 35 and Pakistan finished on 154-6 after winning the toss and opting to bat first. England reached the target with two balls to spare 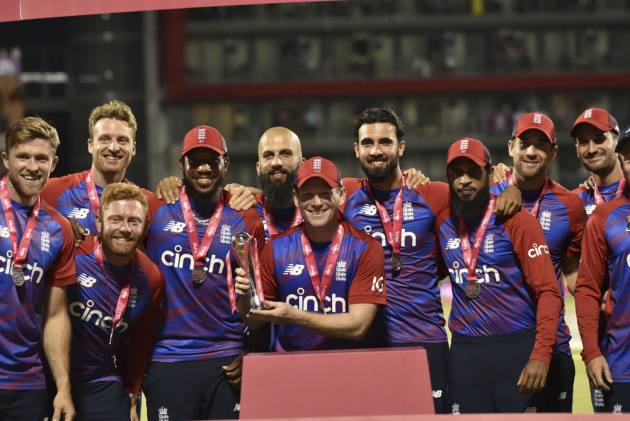 Rashid took four wickets for 35 and Pakistan finished on 154-6 after winning the toss and opting to bat first on Tuesday.

Jason Roy (64 off 36) opened well before the visitors chipped away with wickets, leaving it No. 8 Chris Jordan to sprint through for the winning runs with just two deliveries and three wickets remaining. England reached 155-7.

For the second consecutive match, England shut down the visitors with spin, as Rashid and Moeen Ali (1-19) had their way at Old Trafford cricket ground. Rashid had never taken four wickets in a T20 International before.

Dawid Malan (31 off 33) struggled before returning captain Eoin Morgan (21 off 12) gained control, picking his moments against Hasan Ali (1-28) and twice sending the ball into the stands for six.

In the dramatic penultimate over, Malan was bowled by Mohammad Hafeez (3-28) before Liam Livingstone left impressions while facing just two deliveries — smashing one for six and caught off his next, leaving six required off the final over.

Morgan was held in the deep with four needed before two hard-run twos from Jordan's bat settled it.

Batting first, Pakistan made 40 off their first five overs with Mohammad Rizwan (76 of 57) with early sixes off Saqib Mahmood and Jordan. But the usually reliable captain Babar Azam (11 off 13) struggled.

Pakistan had slumped to 69 for three in the ninth.