James Anderson became only the fourth bowler in the history of Test cricket to take 600 wickets. The England bowler, who achieved the feat in the 3rd Test against Pakistan, is also the first pacer to do so 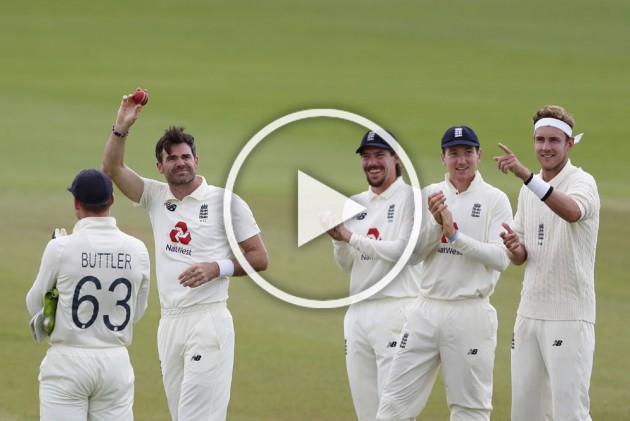 James Anderson on Tuesday become only the fourth cricketer to take 600 or more Test wickets as England continued to push for a win against Pakistan in the third match at The Rose Bowl, Southampton. (More Cricket News)

Anderson, 38, needed two wickets on the penultimate day yesterday to become the first fast bowler in the history to take 600 wickets in the longest format, but could only dismiss Abid Ali for a patient 42.

Then, after hours of wait on the final day, the play finally resumed giving Anderson the chance to reach the landmark. Then, in the 62nd over of Pakistan's second innings, the right-arm bowler induced a fine nick off skipper Azhar Ali's bat, for his 600th Test scalp.

He was left tantalisingly on the brink of history with 599 Test wickets when bad light halted play after Pakistan frustrated England on a rain-affected fourth day of the final Test.

Retired spinners Muttiah Muralitharan (800), Shane Warne (708) and Anil Kumble (619) are above Anderson on the all-time list of wicket-takers In Test cricket.

Anderson, playing for the 156th time in Test, was at his brilliant in claiming a 29th five-wicket haul.

A five-for on debut against Zimbabwe in 2003 launched Anderson's red-ball international career and he went on to establish himself as the leader of the England attack under Andrew Strauss' captaincy, with the side memorably winning the 2010-11 Ashes away from home and ascending to number one in the world.

He became England's most prolific bowler in his 100th Test match against West Indies in 2015, dismissing Denesh Ramdin to reach 383 victims and overtake Ian Botham.

Anderson has since continued to go from strength to strength, usually in alliance with his long-time new-ball partner Stuart Broad, who joined him in the 500 club earlier this season.

When Anderson removed India's Mohammed Shami at The Oval in 2018, he moved on to 564 wickets to usurp Aussie great Glenn McGrath as the most prolific seamer ever.

He now has Indian legend Kumble next in his sights.