Adil Rashid and Moeen Ali star as England beat the defending champions West Indies in their opening match of the T20 World Cup 2021 at Dubai on Saturday. 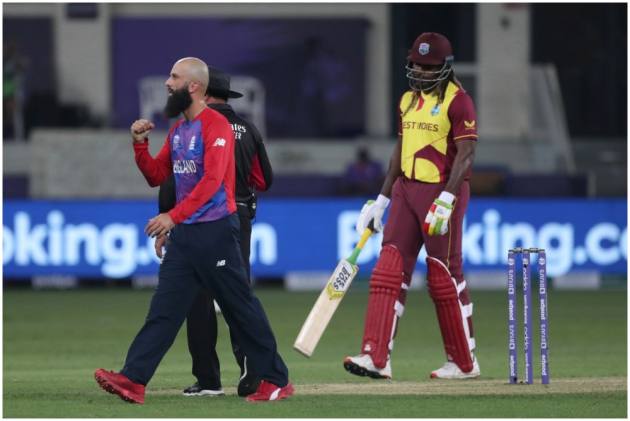 "It's as good as it gets. To start our campaign like that, all credit to our bowling unit. The guys were very disciplined, and we took our chances," Morgan said at the post-match presentation after England cantered to the paltry target of 56 in 8.2 overs.

Moeen ended his spell in a splendid manner, bowling as many as 18 dot balls in his four overs while conceding just 17 runs.

"I think Moeen Ali read the conditions beautifully, he took chances when his match-up was in his favour, and to take his opportunity like he has, after the success he's had in the IPL was brilliant."

Pacer Tymal Mills was also impressive as he also took two wickets for 17 runs from his four overs.

"I'm delighted for Big T. He's had an unfortunate journey at times, but he's now as good as I've ever seen him, especially with his fitness."

Morgan said Dawid Malan was pushed down the order and was not sent in the middle so as to knock off the required runs quickly.

"We were (thinking of net run rate, and held back Malan), we wanted guys to go after the bowling, but that was difficult today on that pitch."

Ali, who was adjudged Player of the Match, said his stint at the IPL winning side Chennai Super Kings helped him.

"The role at CSK is very important for me, it feels like I'm always involved with bat and ball and on the field too, and it was the perfect preparation coming into the World Cup."

On his superbly judged effort at mid-off to send back West Indies batter Evin Lewis, he said, "A catch like that gives you a bit of confidence, I think it settled my nerves a bit.

"They do have a lot of left-handers at the top, so I knew I would be bowling early on."

West Indies captain Kieron Pollard admitted that it was an unacceptable performance from the West Indies batsmen but said there is no need to press the panic button.

"It was unacceptable, we accept that. These sorts of games sometimes, we just need to bin it. For us, it's just a matter of finding our straps. We haven't batted well in our three games so far. We went out, guys tried to play their shots, and it didn't come off. I don't think any sort of panic will come into our camp," he said.

The total of 55 was West Indies' second lowest T20 total after 45 they made against the same opponents in 2019. It was also the third-lowest total in T20 World Cup behind 39 and 44 (both by the Netherlands).

Pollard, however, said that it was not the first time something like this has happened to his team.

"It is what it is, we just need to take it on our chest and move on, this is an international sport. Obviously, we play a lot of cricket around the world, and this is not the first time something like this has happened."

"We've played cricket around the world, and we have the experience of games like this. Getting an opportunity because of the injury to Fabian Allen. Everything happens for a reason, and Akeal Hosein showed us what he can do."