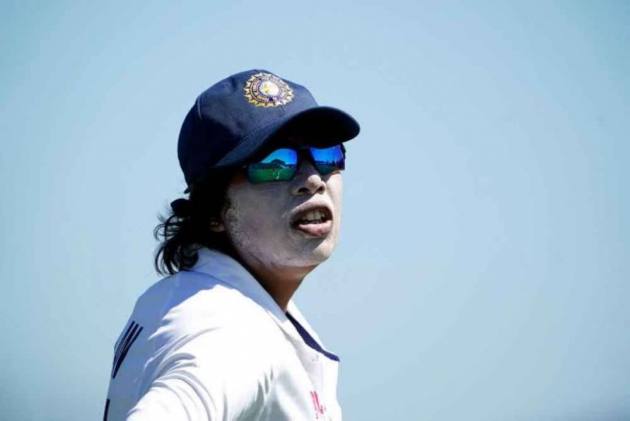 The Indian women's cricket team would be trying out various options during the upcoming England series and beyond to check out what is the best possible combination that can be fielded going into next year's WODI World Cup in New Zealand, said senior player Jhulan Goswami. (More Cricket News)

India's senior middle-order batters like skipper Mithali Raj, Punam Raut and Deepti Sharma were all guilty of wasting as many as 180 odd deliveries in the first ODI which England won by eight wickets chasing a modest target of 202.

Goswami didn't give a definitive answer on vice-captain Harmanpreet Kaur's batting position but indicated that a lot of options will be tried out before the World Cup in New Zealand next year.

"Well, we are trying to settle our combination. We are trying to create a few options. Now which options will click for us, we are (still) searching for that. Whatever things will happen (options we finalise), the management will take a call before the World Cup," Goswami said on the eve of second WODI against England.

"Before the World Cup, we are trying to settle down a few things. Hopefully, in the coming matches, coming series, we will sort out all those things."

Young Shafali Verma shouldn't be put under immense pressure of expectation, feels Goswami, who is confident that it's just a matter of time before the middle-order will produce impact performances expected of them in the ongoing series against England.

"Well...It's is just the first match for Shafali. Day before yesterday, she made her debut in ODI cricket. We are expecting so much from her because that is the impact she has had," Goswami, world's highest wicket-taker in women's ODIs, wants everyone to cut some slack when it comes to analysing the performance of a teenager.

"We just need one good knock from one among the top 3. They will definitely score runs. Just these things happen in cricket," Goswami said about consumption of 180 dot balls.

Jhulan also believes that as a bowling group, they need to up their game after Tammy Beaumont and Nat Sciver gave them a real pasting in the opener with both scoring at a strike rate of 100.

"Honestly speaking, we need to come back as a bowling group strongly. We have discussed a lot of things, hopefully we can sort it out and come back strongly. You have to believe in these bowlers, they are your best bowlers, they have the ability.

"Both of our medium-pacers Shikha Pandey, Pooja Vastrakar and we have another two pacers in the side, all are very good cricketers. Shikha is coming back from a break.

"Puja is playing after a long time. They are quality bowlers. They need a little bit of time, they will do well. They have won matches single-handedly for India. We just need to give them some time, they will come back strongly. I have a lot of confidence in them," Jhulan signed off.