ENG W vs IND W: Shafali Verma Will Be Very Important For Us In All Formats, Says Mithali Raj

Verma smashed 96 in the first innings and made 63 in the second, to become the youngest woman and fourth overall to score twin half-centuries on Test debut 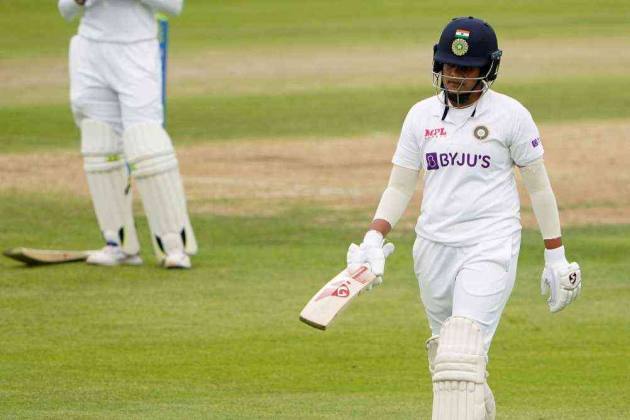 Shafali Verma's spectacular debut has caught the imagination of the Indian women's team Test skipper Mithali Raj, who feels the teenager would be a key member of the side in all the formats of the game in future. One-off Test Highlights | News

The 17-year-old, who had smashed a stroke-filled 96 in the first innings, made 63 in the second innings, to become the youngest woman and fourth overall to score twin half-centuries in her debut Test and was rightfully adjudged player-of-the-match.

"She will be very, very important to the Indian batting unit in all formats. She beautifully adapted to this format," Mithali said in a virtual media interaction after India, following on, salvaged a draw in the one-off Test against England.

"She didn't go like how she would go bonkers in the T20 format. She played sensibly against the new ball and it's great to have her."

Asked what prompted the Indian team management to hand Verma a Test debut in England, Mithali said: "She has great range of shots, and she can be very, very, effective in a format like this if she gets going. In no time, we could see that the score would be somewhere else if she gets going.

"Once we knew that it's a used wicket and there won't be much of a movement, we thought it would be a good time to give her a Test debut and she lived up to it."

Mithali rated the young opener's knock in the second innings ahead of her first innings score of 96 as the teenager showed utmost composure and maturity.

"The (second innings) fifty came with a little more sorted head and a little bit more experience. Those sweetly-timed drives, it was beautiful to watch her. I'm sure she will grow from strength to strength from here on."

In reply to England's first innings score of 396 for 9, India, playing their first-ever Test in seven years, collapsed to 231 from 167 for no loss, courtesy the fine start given by Verma and Smriti Mandhana.

Following-on, India had a familiar collapse after fifties from Verma and Deepti Sharma and they were staring at a loss before debutants Sneh Rana (80 not out) and wicketkeeper Taniya Bhatia (44 not out) frustrated the English bowlers to pull off a thrilling draw in the final session.

Rana, who was playing her first game for India in five years, was handed a surprise debut and Mithali said the off-spinner's ability to bat clinched it for her.

"It was important for us to pick spinners who have been doing well because we didn't have much of a camp or tournament before this. Sneh (Rana) was bowling very well along with Deepti. Her bonus was that she was a batter and we wanted to lengthen our batting order."

"I'm okay with it as it gives more chances of a result. But I would prefer having a Test match in every series, and take it from there," Mithali said.

India stretched their unbeaten streak against England women to 26 years with this draw and Mithali said the visitors' outstanding show would put the home side on the back foot going into the limited overs series.

India will now play three ODIs and as many T20Is against England beginning with the first game here on June 27.

"Psychologically, I think it's a big boost and will definitely put England on back foot because they know that even though the main batters have not performed, the lower middle order stood up," she said.

"The Indian batting line up is deep now and it's not just the top-order. The lower middle-order also can bat and put in match-winning partnerships," she said.

India women will play their first-ever pink-ball Test at the WACA during their tour of Australia in September and Mithali said the just-concluded match against England augurs well for them.

"These girls have shown even with lack of practice with the red ball and the longer format, they stood up and performed. I think confidence is what we will be carrying into the next Tests. I know it's a pink ball Test but preparation will be equally important.

"Having said that, the mental space that these young girls are in after today's performance will have a very positive impact, moving into a longer format for the coming Pink Ball Test," she concluded.