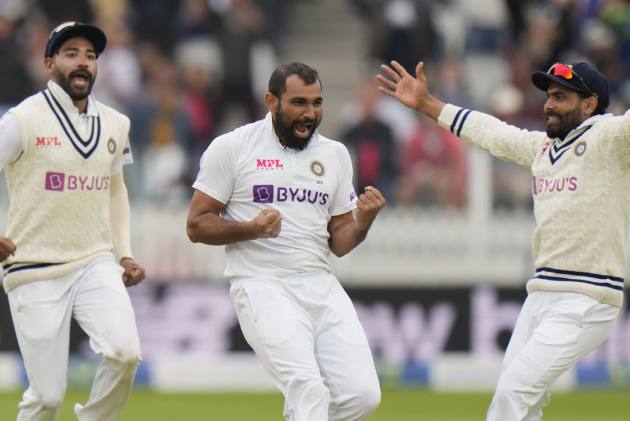 India registered a thrilling 151-run win in the second Test against England at Lord's, London on Monday to take a 1-0 lead in the five-match series. Starting the final day at a precarious position, India ended up setting a 272-run target for England after declaring their second innings at 298/8. And the heroes of the day were pace duo, Mohammed Shami and Jasprit Bumrah, who first stitched a record unbeaten ninth-wicket stand of 89 runs. Soon after the innings break, Burmah and Shami got into the action, removing England openers. Veteran Ishant Sharma responded with a brace, followed by Bumrah getting the big wicket of Joe Root. Mohammed Siraj then claimed two in two to leave England tottering at 90/7 in 38.2 overs. Siraj also claimed the last two wickets -- those of Jos Buttler and James Anderson -- wrap up the match. But, it all started with the eventual man of the match, KL Rahul's 129 in the first innings with Rohit Sharma giving him good company even as James Anderson got another fifer. India then ran into Root, who hit a magnificent 180 not out to help England take a 27-run lead. Siraj and Ishant got four and three wickets. And mighty impressively, Indian pacers took all 20 wickets in the match with Siraj getting eight. For the record, this is India's eighth win in England in 64 matches and first at Lord's since 2014. Overall, this was India's 30th win over England. The last time they met here, England beat India by an innings and 159 runs in 2018. But India are unbeaten against England in five matches (won four). The series opener at Trent Bridge, Nottingham ended in a draw with rain playing spoilsport on the final day. The third match at Headingly, Leeds is scheduled to start on August 25. Catch Day 5 highlights and cricket scores of the 2nd England vs India Test series:

The last ball before tea and Ishant Sharma gets Jonny Bairstow. India still lead by 205 runs. England will need to survive 38 overs.

3:20 PM IST: Minutes away from the start of the final day's play at Lord's. Here's how the pitch looks like