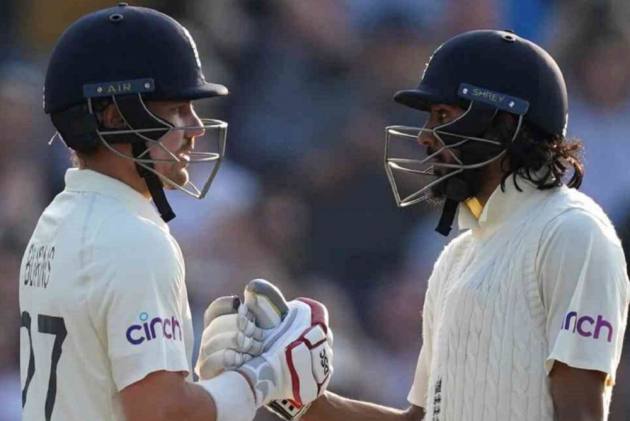 England completely dominated the proceedings on the opening day of the third cricket Test against India by reaching 120 for no loss after bundling out the visitors for a paltry 78 in their first innings on the opening day of the third Test in Headingley on Wednesday. At the close of play, openers Haseeb Hameed (60 not out) Rory Burns (52 not out) remained unconquered at the crease and took England's lead to 42 runs. Earlier, veteran pacer James Anderson (3/6) and Craig Overton (3/14) claimed three wickets each, while Ollie Robinson (2/16) and Sam Curran (2/21) took two each as the England bowlers wreaked havoc on the visitors. Indian skipper Virat Kohli won the toss and elected to bat first but the batting unit cut a sorry figure with opener Rohit Sharma (19) and Ajinkya Rahane (18) being the only batsmen to reach double digit scores. At lunch, India were struggling at 56 for four. India had taken a 1-0 lead in the five-match series after winning the second Test by 151 runs at Lord's. Brief Scores: India 1st innings: 78 allout in 40.4 overs (Rohit Sharma 19, Ajinkya Rahane 18; James Anderson 3/6, Craig Overton 3/14). England 1st innings: 120 for no loss in 42 overs (Haseeb Hameed 60 not out, Rory Burns 52 not out).  Catch the highlights here.

3:30 PM IST: KL Rahul, Rohit Sharma to start for India, while James Anderson has the ball in hand for England

3:00 PM IST: Virat Kohli has won the toss and will bat first; India go into this match unchanged. England have been forced to make two changes. England have Dawid Malan playing, while Craig Overton comes in for injured Mark Wood