Broad will miss the match with a calf injury, while Anderson is also a doubt for the game and struggling with a tight quad. 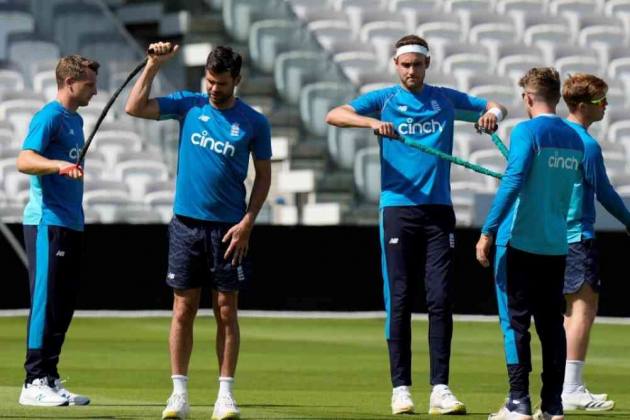 The thought of going into a Test without the seasoned pace duo of Stuart Broad and James Anderson is definitely not a good one, England's wicketkeeper-batsman Jonny Bairstow admitted on the eve of the second match against India. 2nd Test Preview | Live Streaming | News

Bairstow said he doesn't have much knowledge about the extent of injuries suffered by Broad and Anderson, rendering one unavailable and the other doubtful for the second Test against India.

Broad will miss the match with a calf injury, while Anderson is also a doubt for the game and struggling with a tight quad.

"We don't really have much information. We know that Broad has gone for scans, we don't know anything else," Bairstow said at the pre-match press conference on Wednesday.

Asked about the possibility of playing a Test without both Anderson and Broad, he said, "It's a big loss for the team -- both have over 1000 wickets between them -- but it's also an opportunity for others, just like it was against Pakistan recently," Bairstow said.

He added, "There is going to be injury, illness, you have to be adaptable within the group, we are playing a professional sport."

Bairstow was also asked about the moment when India pacer Mohammed Siraj gave him a silent send-off after dismissing him in the series opener in Nottingham.

IN PICS: India, England Get Ready For 2nd Test At Lord's

After Bairstow and skipper Joe Root had carved out a nice, little partnership to frustrate the Indians, Siraj sent back the former with a short ball and had his finger on his lips as the batsman walked back in disbelief after failing to connect a pull shot.

Returning to the Test fold, Bairstow said the last few months have been "very happy" from the personal point of view, including his "pleasing" outing in the IPL and The Hundred.

Apart from Root, Bairstow was among the very few England batsmen who appeared to look confident against Jasprit Bumrah and Co. in the first Test.

"I spent decent amount of time at the crease though I did not get big scores. If I keep doing what I was doing in those two innings, hopefully, I will do well.

"I am excited to be back in the Test side, first full house at Lord's in a long time (in the second Test). As I mentioned, if I keep that mindest, approach, that's going to be the best way forward for me in the near future. It's (Test cricket) is different, I am just looking to enjoy."