Catch Day 2 highlights and cricket scores of the one-off Test between England Women and India Women, being played at County Ground, Bristol 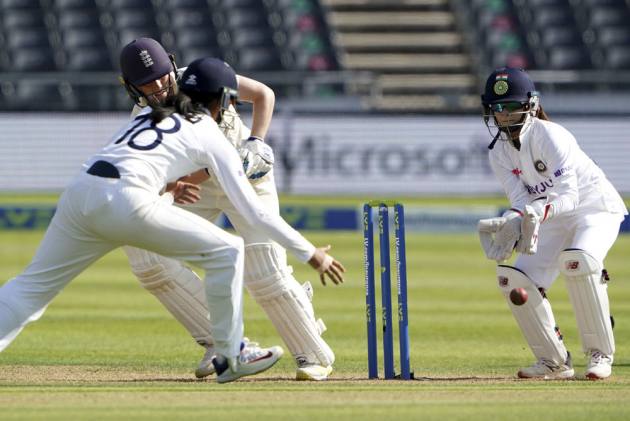 What a match. England Women declared at 396/9, then put their Indian counterpart on the mat as the hosts take a 209-run lead at the close of Day 2's play of their one-off at Test County Ground, Bristol Thursday. But there was a moment when India were in control. After allowing England to post the highest-ever total against them, India raced to 167 in 49 overs with openers Smriti Mandhana (78) and Shafali Verma (96) toying with the bowlers. But the visitors lost five wickets for 20 runs as Punam Raut, Shikha Pandey and skipper Mithali Raj failed to reach the double figures. Effectively, it was 5/16 in that crazy period after the team. Rival captain Heather Knight herself took a couple, while Natalie Sciver, Kate Cross and Sophie Ecclestone were among the wickets too. At the close of play, India Women were 187/5 in 60 overs. Catch Day 2 highlights and cricket scores of the one-off Test between England Women and India Women.

11:04 PM IST: Sumps! India Women are in deep trouble. They still need another 60 runs to avoid follow-on after a shocking period of play in which they lost five wickets. Before that, they were cruising, with Smriti Mandhana and Shafali Verma on a 167-run opening stand. England still lead by 209 runs.

6:30 IST: England have declared at the score of 396/9 after the fall of Anya Shrubsole for 47, to Sneh Rana. Sophia Dunkley remained unbeaten on 74. Rana took four wickets, while Deepti Sharma claimed three.

5:35 PM IST: India managed to take a couple of wickets, but England are firmly in control. The hosts have reached 357/8 (118) with debutant Sophia Dunkley in fine touch. She is unbeaten on 66. Anya Shrubsole on 16, is giving her company.