Eoin Morgan hit 17 sixes in his knock of 148, an ODI record and England wracked up the highest total in this ICC Men’s Cricket World Cup. 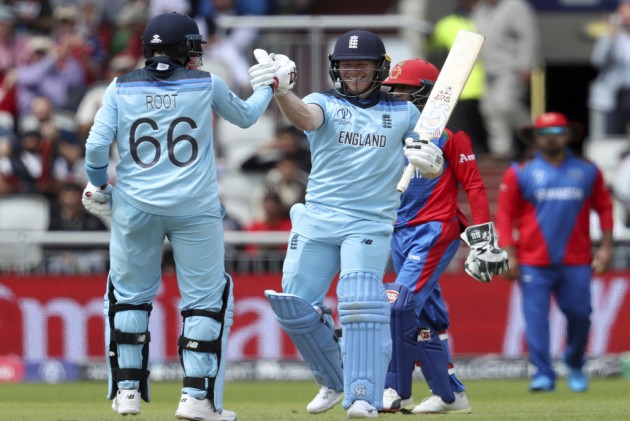 England were in record-breaking mood at Old Trafford as they produced the best batting display of the World Cup so far. Having won the toss and opted to bat first against Afghanistan in Manchester, the hosts paced their innings perfectly as Jonny Bairstow’s 90 off 99 balls and Joe Root’s 88 from 82 set the platform for Eoin Morgan to provide the real fireworks.

The skipper produced a true captain’s knock to smash 148 off just 71 deliveries and take his side to 397/6 from their 50 overs.

There were records aplenty tumbling, so we’ve run you through a few of the most eye-opening stats from England’s exhilarating effort.

17: Most individual sixes in an ODI innings

Perhaps the headline record to fall was Morgan setting a new high for the most sixes by any player in an ODI.

Seven of those came off Rashid Khan, who had never given up more than two sixes in an ODI before, and he brought up the record with a trademark straight drive that just reached the boundary rope.

25: Most team sixes in an ODI innings

Morgan’s 17 boundary-clearing strokes may have done most of the work but his teammates also chipped in to help England set the record for the most team maximums in an ODI.

Bairstow hammered three, Root struck one and Moeen Ali clubbed four in just nine balls as part of his scintillating 31-run cameo to give the hosts 25 in total.

They beat their own previous record of 24 – set against the West Indies earlier this year – and for context, 25 is three more than they have ever scored in an entire single ICC Men’s Cricket World Cup campaign before.

As his record number of sixes suggest, Morgan wasn’t hanging about at Old Trafford and brought up his century in just 57 balls – the quickest by an Englishman at an ICC Men’s Cricket World Cup.

It was also the fourth-fastest ton by a batsman of any nationality in a World Cup match, with Kevin O’Brien’s historic 50-ball hundred in 2011 still the target, and Glenn Maxwell and AB de Villiers also having passed 100 more quickly in 2015.

The effort was all the more remarkable give the 32-year-old scored just one off the first seven balls he faced.

They may have fallen three runs short of the fifth 400-plus total accrued at a World Cup but their 397 was still England’s highest score in the history the tournament.

The previous record was only ten days old – the 386/6 they posted against Bangladesh in Cardiff – as the hosts once again demonstrated their firepower with willow in hand.

They may well have Australia’s World Cup-record score of 417/6, accumulated against Afghanistan in Perth four years ago, in their sights before the end of this year’s competition.

5: Most England centuries at an ICC Men’s Cricket World Cup

Morgan’s knock was England’s fifth ton of the competition, extending his country’s record of the most centuries they have hit at a World Cup.

England had never scored more than two hundreds in an edition before but with the skipper adding to Root’s two and one apiece for Jos Buttler and Jason Roy, that record has been blown out of the water this year.

When he fell for 88 off the bowling of Gulbadin Naib, Root was also just 12 runs short of becoming the first English batsman to score three centuries in one World Cup but for the time being remains level with Kevin Pietersen’s mark of two in 2007.

193: Most career ODI sixes for England

Morgan also extended his advantage atop the leaderboard for ODI sixes hit for England, as his 17 maximums took his total to 193.

Buttler is currently his skipper’s nearest challenger, way back on 123, with charismatic all-rounder Andrew Flintoff third on the list with 92.

Morgan’s exploits against Afghanistan also lifted him to sixth on the all-time list for most ODI sixes with 211 (which includes his time representing Ireland) as he leapfrogged De Villiers, Brendon McCullum and Sachin Tendulkar in one fell swoop – not bad for a day’s work.

397: Highest score in an ODI at Old Trafford

Old Trafford isn’t historically a particularly high-scoring ground, as demonstrated by the fact that heading into the ICC Men’s Cricket World Cup 2019, Sri Lanka’s 318/7 against England in 2006 was the greatest ODI total at the venue.

But that record has now been broken twice in three days with India racking up 336/5 against Pakistan on Sunday, before England almost immediately smashed that with their 397.

The latest contest was the 49th ODI held at the home of Lancashire, while the score by Morgan’s men has only been surpassed on 42 occasions in 135 years of the Manchester ground hosting Test matches.