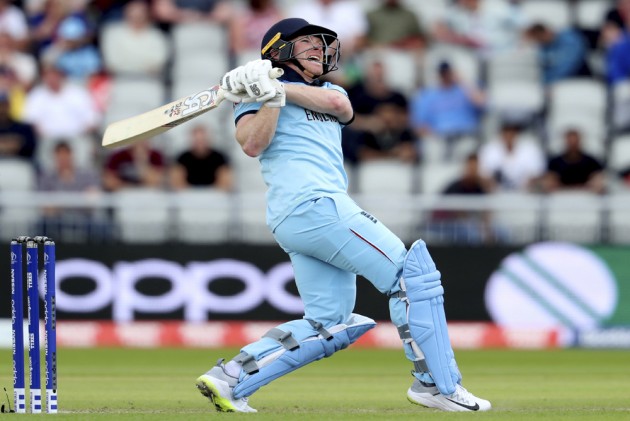 Even Eoin Morgan was shocked by his record-breaking innings against Afghanistan but claims his England teammates still won’t be impressed. Morgan blasted an incredible 17 sixes – the most in ODI history – as part of a game-changing knock of 148 at Old Trafford, breaking the previous record of 16 jointly-held by master-blasters AB de Villiers, Chris Gayle and Rohit Sharma.

It paced England to a score of 397/6 – their highest at an ICC Men’s Cricket World Cup – and they eventually recorded a 150-run triumph to return to the top of the table.

Morgan brought up his century off 57 balls, although that was 11 slower than Jos Buttler’s England record of 46 deliveries against Pakistan in 2015 – meaning the skipper doesn’t have complete ownership of bragging rights.

“I think I'm probably just becoming a target for the guys in the changing room to take down,” joked Morgan. “The hundred I scored is considered a slow one in our changing room – guys talk about it all the time. So it’s a tough school!

“Never have I ever thought I could play a knock like that but I'm delighted that I have.

“It's weird. It's very strange to have that sixes record. It's something, along with the innings, I never thought I'd do. It's a nice place to be.

“The last four years, I've probably played the best in my career but that hasn't involved a 50 or 60-ball hundred.

“I thought I would have it in the locker somewhere but it's never happened, so I sort of gave up on it a little bit.

“When I came to the crease, it was a 50/50 shout whether myself or Jos (Buttler) went in and that probably helped because after I faced a few balls, I had no choice.

“I had to start taking risks because of him coming in next and then after I got dropped [on 28], it was a matter of just keep going. It was one of those days.”

Morgan’s innings was even more remarkable given the fact he struggled with back spasms during the last game against West Indies and had to face a late fitness test in order to play against Afghanistan.

That certainly didn’t hinder him at the crease and once England had set an intimidating total, the bowlers clinically finished the job to secure an emphatic victory.

And among the excitement surrounding batting records, Morgan was quick to praise his pace attack – headlined by Jofra Archer taking 3/52 and Mark Wood an impressive 2/40 from ten overs.

“They were very good on a wicket that didn't offer a great deal,” added Morgan. “It had good bounce and turned a bit for the spinners but seam movement or swing – it had none.

“So when guys execute hitting a good length and using their bounce well, it is satisfying because it's very hard to do.

“When the ball doesn't move around, it obviously means your pace is important and all three guys’ (Wood, Archer and Chris Woakes) pace looked good.”