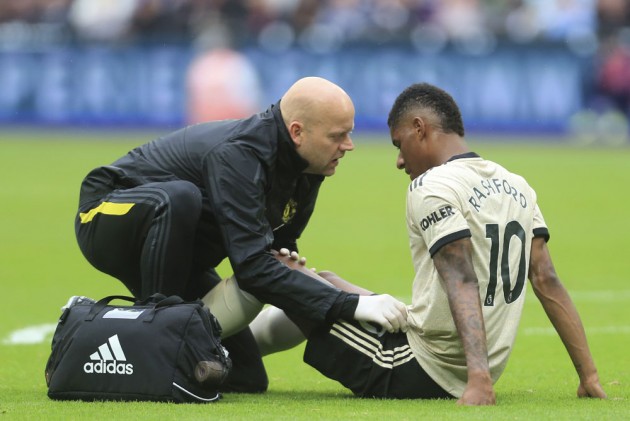 Manchester United's mini-revival was ended by West Ham as they fell to a 2-0 defeat at the London Stadium.

Ole Gunnar Solskjaer's men had won back-to-back matches in all competitions heading into Sunday's Premier League clash but were beaten by goals from Andriy Yarmolenko and Aaron Cresswell late in both halves.

Yarmolenko scored the breakthrough goal 44 minutes in and Cresswell converted a free-kick six minutes from time to kill off United, who ended the match without a recognised striker after losing Marcus Rashford to injury.

Victory for the visitors would have lifted them into third place but it is West Ham who leap up the table, Manuel Pellegrini's men moving into the top four thanks to their third win of the season.

The sides managed just six shots between them in the first half - only one Premier League game has seen fewer in the opening 45 minutes this season - but West Ham found a way through from one of them.

Felipe Anderson played a first-time pass into the path of Yarmolenko, who took a touch and rifled the ball into the bottom-left corner of David de Gea's goal.

United continued to look disjointed in the opening 15 minutes of the second half and were further blunted in attack when Rashford was forced off in the 61st minute.

The visitors did come close to a leveller with 68 minutes on the clock, though, Harry Maguire seeing a low shot saved by Lukasz Fabianski after being teed up by Scott McTominay.

But they were punished for failing to take their only real opportunity of the match as Cresswell curled in a free-kick late on to seal the win.

12 - Since the start of the 2011-12 season, David de Gea has conceded more Premier League goals from direct free-kicks than any other goalkeeper (12). Weakness. pic.twitter.com/tDsOUjTl2c

What does it mean? Shot-shy United lacking options

Somewhat forced by injuries to key men, Solskjaer named an unchanged starting line-up in the Premier League for the second time this season - something United did not manage a single time in 2018-19.

Mason Greenwood, the match-winner against Astana, missed out through illness and Rashford's hamstring injury will cause further problems for Solskjaer.

For a side that has spent so heavily in recent years, they played the final half an hour of this match without a recognised striker on the field.

Yarmolenko's movement, drifting from the right-hand side into the middle, caught out Maguire and United's other defenders.

Felipe Anderson's vision made the opening goal possible, the Brazil midfielder setting up his team-mate to make it nine goals and six assists since the start of last season.

In the prolonged absence of Anthony Martial, it has been left to Rashford to lead the line for United. In a fixture in which he tends to perform well, Rashford struggled to get involved and hobbled off on the hour having touched the ball only 24 times.

- After winning each of his first nine away games in all competitions, Ole Gunnar Solskjaer has failed to record a victory in his following nine (D3 L6).
- West Ham have won three of their last five Premier League home games against Manchester United (D1 L1), as many as they had in their previous 23 home games against them in the top flight (W3 D11 L9).
- Manuel Pellegrini is the first manager to win a Premier League game against four different Manchester United managers (David Moyes, Louis van Gaal, Jose Mourinho and Ol Gunnar Solskjaer).
- Manchester United have failed to keep a clean sheet in any of their last 11 away matches in all competitions, their worst run since conceding in 14 consecutive matches between April and December 2002.
- Felipe Anderson has been directly involved in 15 Premier League goals for West Ham since the beginning of last season (9 goals & 6 assists) - more than any other Hammer in that period.

Both sides are in EFL Cup action on Wednesday, with United hosting Rochdale and West Ham travelling to Oxford United.

Solskjaer's side then welcome Arsenal to Old Trafford on September 30, while the Irons face Bournemouth on the south coast next Saturday.