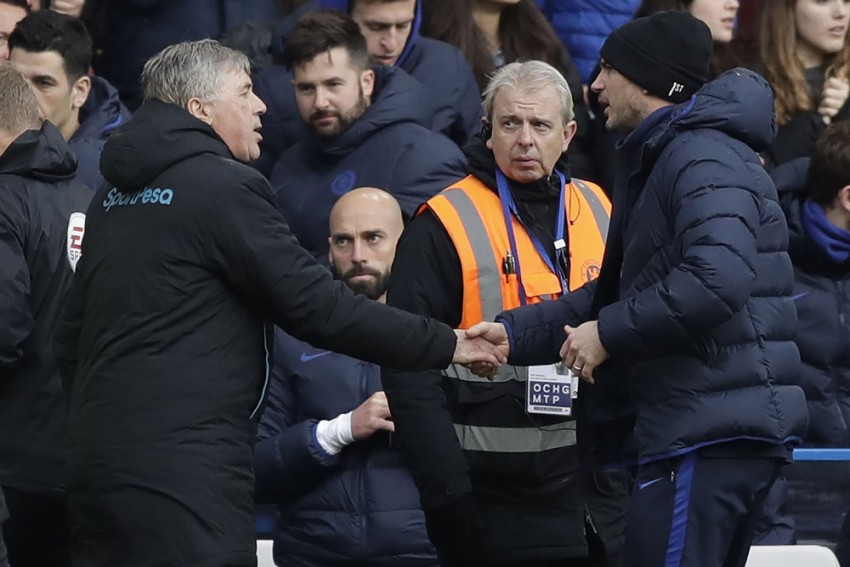 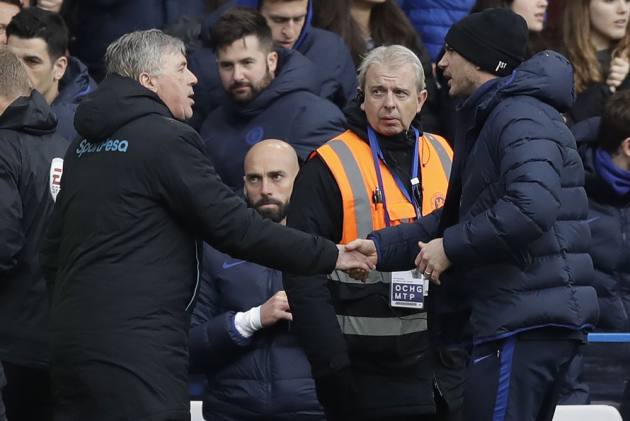 Everton were completely overwhelmed by a Chelsea midfield that saw Billy Gilmour make his first Premier League start alongside Ross Barkley and Mason Mount, who got the Blues up and running in the 14th minute.

Pedro assisted Mount and was himself on target in the Premier League for the first time since February 2019 seven minutes later – the experienced winger involved in as many goals in the opening 21 minutes as in his previous 21 appearances in the competition.

Willian drove home a powerful effort and set up Olivier Giroud in the space of three second-half minutes to put the result beyond doubt, with Frank Lampard's side claiming just their third top-flight win of the year.

Jordan Pickford did well to keep out Mount's first effort, but the midfielder scored the opener when a sublime first touch while turning on the edge of the box was followed by a sweeping drive into the bottom-left corner.

20 - There were 20 passes in the build up to Chelsea's first goal against Everton, scored by Mason Mount - the second longest passing sequence leading to a Chelsea goal in the Premier League this season. Silky. #CHEEVE pic.twitter.com/TFWEupxKaJ

Willian outpaced Mason Holgate and had a cross-goal effort kept out well by Pickford, before Pedro doubled the hosts' lead by slotting home from Barkley's throughball to finish a wonderful passing move.

Dominic Calvert-Lewin failed to show the prowess in front of goal that earned him a new five-year contract his week, scuffing wide when up against Kepa Arrizabalaga in the goalkeeper's first Premier League game since January 21.

Chelsea picked up where they left off in the second half with Willian arrowing a powerful finish past Pickford in the 51st minute.

Giroud then evaded some dismal marking from Holgate to turn home a curling, first-time delivery from Willian, before Pickford stopped Pedro from making it five.

Lampard handed Premier League debuts to teenagers Faustino Anjorin and Armando Broja off the bench. A good challenge from Djibril Sidibe prevented Anjorin marking the occasion with a goal to round off an already resounding win.

What does it mean? Everton a shambles

The Toffees beat Chelsea 3-1 in the reverse fixture at Goodison Park but fell well short of replicating that display in west London.

Ancelotti won the Premier League and FA Cup during two years with the Blues, but his decision to set his team out in a 4-4-2 shape allowed Chelsea to dictate the terms of the match in midfield, while Calvert-Lewin and Richarlison received minimal service.

The benefit of experience

Chelsea's front three of Pedro, Giroud and Willian stood in stark contrast to their youthful midfield, but each of the attacking trio played an important role in the victory. The wingers had a goal and assist each, while Giroud connected the play well.

A bad Davies at the office

Everton were overrun in midfield from minute one, but Tom Davies was guilty of giving Mount too much space ahead of the opener and was nowhere to be seen on the next two goals. He was replaced by Moise Kean in the 58th minute.

- Chelsea registered their biggest Premier League victory since a 5-0 win over Huddersfield Town in February 2019.

- Everton manager Carlo Ancelotti suffered his joint-heaviest league defeat as a manager, with this equalling a 4-0 loss against Atletico Madrid as Real Madrid manager in February 2015.

- Chelsea have scored 21 goals via English players in the Premier League this season – only Leicester City (31) and Southampton (24) have had more.

- Everton had just three shots – their fewest in a Premier League game since December 2017 against Liverpool (also three attempts).

- Chelsea used three 18-year-olds – Gilmour, Anjorin and Broja – becoming the first team to feature three players aged 18 or younger in the same Premier League game since May 2016, when West Brom did so against Liverpool.

- Gilmour became the first outfield Scottish player to start a Premier League match for Chelsea since Steve Clarke in May 1998, with that match taking place more than three years before Gilmour was born.

Chelsea head to Aston Villa next Saturday, while Everton have a Merseyside derby against Premier League leaders Liverpool awaiting a week on Monday.