Sergio Aguero got back on the goal trail in Manchester City's win over Marseille but is not ready to start against Manchester United. 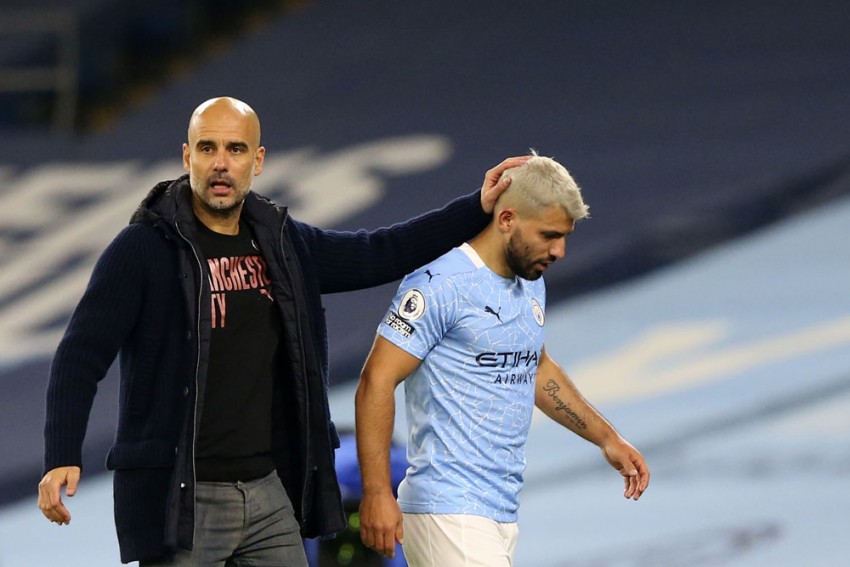 Pep Guardiola insists Sergio Aguero will not start Saturday's derby at Old Trafford despite making a goalscoring return to action for Manchester City in the Champions League. (More Football News)

Aguero played 25 minutes as a second-half substitute and poached the second goal in a 3-0 win over Marseille from close range.

Complications in his recovery from meniscus surgery have limited the 32-year-old to four appearances this season and Guardiola said after the match that he would take a long-term view of his star striker's fitness.

"He played well, he scored a goal – for his instincts, for his quality in [the penalty area]," he said after Ferran Torres netted his fourth Champions League goal of the season and Raheem Sterling completed the scoring in the final minute.

"We need him to compete with the other [attackers]

"All the guys were brilliant, starting with Kyle [Walker], he is back, and ending with Ferran at the top."

Asked whether Aguero was in his plans for the starting XI against Manchester United, who head into the encounter a point and a place above City, Guardiola replied: "No. He was four of five months injured.

"I would love to feel he is ready, but we don't want to make a setback.

"That's why we must be patient. The important thing is he is here."

At his post-match news conference, Guardiola added: "His instinct to score goals always will be there. The important thing is he made three or four training sessions and the reaction after the training sessions [in the knee] was good.

"Today he had 25 minutes, scored a goal, was active.

"It's step by step. The reaction tomorrow after this effort is the most important thing."

Happy to be back, happy for the W. My knee is feeling better and I'm gradually getting back into condition. My gratitude goes to the physios, the medical and technical staff, my team-mates and the fans for all your support  #ManCity #UCL pic.twitter.com/dtuLIB3L0W

Aguero acknowledged his fitness remains a work in progress following surgery in June and his subsequent setbacks, including a hamstring strain sustained during October's 1-1 draw at West Ham.

"My knee is feeling better and I'm gradually getting back into condition. My gratitude goes to the physios, the medical and technical staff, my team-mates and the fans for all your support."

Ilkay Gundogan could be a doubt for the derby, although Guardiola suggested his withdrawal at half-time against Marseille due to an ankle knock was mainly precautionary.

"He had a knock in his ankle and was a bit disturbed the way he was running the last minutes [of the first half]," the manager explained.

"He played 90 minutes in the last game and we didn’t want to take risks. We'll see tomorrow and the day after tomorrow how he feels."