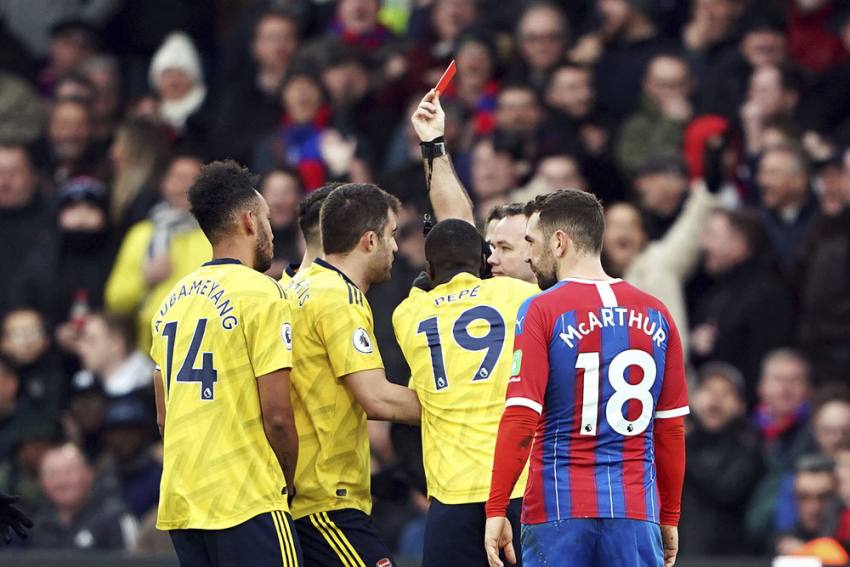 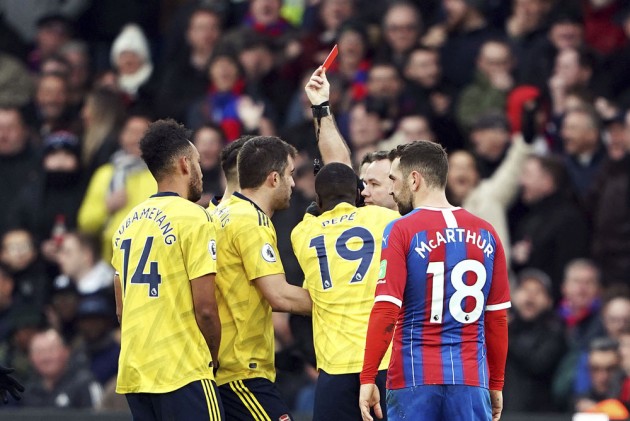 Pierre-Emerick Aubameyang scored and was sent off as Arsenal played out a 1-1 Premier League draw with Crystal Palace on Saturday. (More Football News)

The Gabon international put Mikel Arteta's side ahead with a typically clinical finish early on before Jordan Ayew secured a point for Roy Hodgson's men nine minutes after the interval.

Palace might feel they should have gone on to seal all three points after a VAR review deemed Aubameyang's challenge on Max Meyer in the 67th minute worthy of a straight red card.

The result leaves Arsenal in 10th position, one point behind the Eagles and eight adrift of fourth-place Chelsea.

The @premierleague points are shared. #CRYARS

Arsenal started with a spring in their step and opened the scoring in the 12th minute, courtesy of a fine team goal.

Mesut Ozil and Alexandre Lacazette combined to find Aubameyang on the edge of the penalty area, with the former Borussia Dortmund man taking a touch away from Martin Kelly before clinically slotting into Vicente Guaita's bottom-left corner.

That lead rarely looked in danger throughout the first half, although Bernd Leno had to be alert to keep out Cheikhou Kouyate's deflected effort shortly before the interval.

The hosts started the second period with renewed verve and pulled level in the 54th minute when Ayew's effort took a wicked deflection off David Luiz and looped over Leno.

Luiz then flashed a header narrowly over the crossbar before Aubameyang received his marching orders.

Referee Paul Tierney deemed the forward's ugly lunge on Meyer worth only a yellow card, but a lengthy VAR review saw the offence upgraded to a straight red.

Both sides came agonisingly close to snatching a win in the closing stages.

Sokratis Papastathopoulos cleared James Tomkins' header off the line, while at the other end Guaita superbly tipped Nicolas Pepe's low drive onto the post before smothering Lacazette's follow-up.

What does it mean? No quick fixes for Arteta

Arsenal looked destined for a third consecutive win across all competitions after Aubameyang's early opener. They failed to take advantage of their first-half dominance, though, and allowed Palace back into the game with some sloppy defending.

Arteta has certainly overseen an improvement during his short spell in charge but the second-half display at Selhurst Park proves he has a long way to go to return them to the upper echelons of English football.

The Eagles goalkeeper was a spectator for much of the game but made his mark with a stunning double-stop late on. He got the faintest of touches to divert Pepe's low strike onto the upright and showed superb reactions to deny Lacazette from close range.

Aubameyang went from hero to zero for Arteta's side. He scored his 14th Premier League goal of the campaign with a fine finish before receiving a deserved red card for what was an horrendous challenge.

- Crystal Palace have gone four consecutive league games without defeat against Arsenal for the first time (W1 D3).
- Arsenal have failed to win any of their last 15 Premier League away games against sides starting the day above them in the table (D4 L11), since a 5-2 victory at Leicester back in September 2015.
- Arsenal have failed to win five Premier League matches when leading at half-time this season, their joint highest tally in the competition in a single campaign (also five in 2010-11).
- Jordan Ayew is the first Crystal Palace player to score home and away against Arsenal in a single league campaign since John Craven in 1971-72.
- 95% of Crystal Palace forward Jordan Ayew’s Premier League goals have been scored in the second half (21/22) – the highest percentage of any player in the competition to have scored at least 10 goals.
- Arsenal pair Pierre-Emerick Aubameyang and Alexandre Lacazette have combined for 10 Premier League goals since the Gabonese striker's debut in the competition - only Ryan Fraser and Callum Wilson (13) have combined for more in that time (since Feb 2018).
- Arsenal named the same starting XI (vs Man Utd and Crystal Palace) in consecutive Premier League games for the first time since January 2019 (vs Fulham and West Ham).

Palace face a daunting trip to Manchester City next Saturday, while the Gunners host Chris Wilder's impressive Sheffield United on the same day.