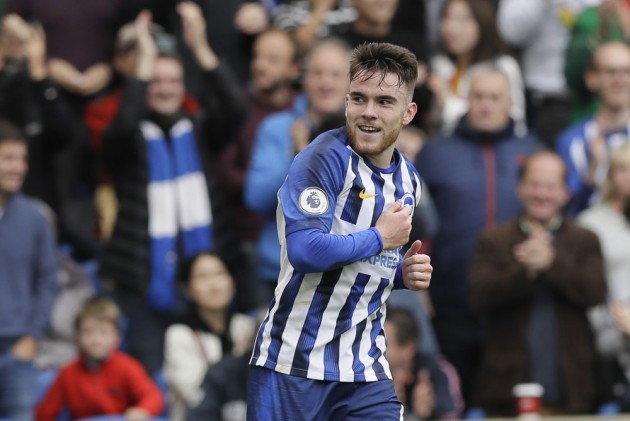 Humiliated in a 7-2 Champions League defeat to Bayern Munich in midweek, Spurs needed a response to ward off rumours of disharmony but encountered only more pain at the Amex Stadium on Saturday.

Lloris bore the worst of it, the captain left in agony and taken from the field on a stretcher following a lengthy delay after landing awkwardly on his left arm in an incident that gifted the hosts a third-minute lead.

The goalkeeper dropped a routine Pascal Gross cross, stumbled backwards and was in too much anguish to keep Neal Maupay from nodding home the loose ball at point-blank range.

Connolly, 19, doubled Brighton's lead before the interval and completed a dream first Premier League start with an exquisite second in the 65th minute that sealed his side's first win over Tottenham since 1983.

2:30 - Neal Maupay's opener for Brighton was their fastest-ever goal in the Premier League. Quickfire. pic.twitter.com/gXPmX1PiNf

Paulo Gazzaniga replaced Lloris - who received oxygen from medical staff - and he was retrieving the ball from the back of the net in the 32nd minute.

The substitute made the initial save after Connolly beat Ben Davies to Dan Burns' delivery from the left but could not prevent the teenager from converting the rebound.

The influential Gross grazed the crossbar with a cheeky free-kick moments before Connolly scored his second, an arrowed right-footed shot into the far corner.

Son Heung-min, Harry Kane and Lucas Moura were all unable to reduce the deficit as Spurs limped to another harrowing defeat.

2 - Aaron Connolly is the first Irish teenager to score a @premierleague brace since Robbie Keane for Coventry v Derby in August 1999. Dreamland. pic.twitter.com/UXQDdwUPF8

What does it mean? Problems piling up for Pochettino

An injured captain, an ineffective Christian Eriksen and a fifth defeat in all competitions - this season is getting no easier for Spurs boss Mauricio Pochettino.

He now has two weeks to address a multitude of concerns, not least the psychology of a side that was clearly still reeling from Tuesday's loss to Bayern.

Brighton had not won in the league since the opening weekend of the campaign, so throwing in a young forward against last season's Champions League finalists was a gamble by Graham Potter.

It paid off handsomely. The Irishman seemed at home as he took on defenders at will and scored two excellent goals.

Dier not the answer

Eric Dier filled the vacancy but struggled badly to plug the gaps so ruthlessly exposed by Bayern, with his heavy touch and wayward passing of no help.

- Tottenham have lost 17 games in all competitions in 2019, more than any other top-flight side.

- Brighton equalled their biggest margin of victory in a top-flight game and scored more than once in a Premier League home game for the first time in 16 games, since beating Crystal Palace 3-1 in December 2018.

- Only Asmir Begovic (21) has made more errors leading to goals than Tottenham’s Lloris (18) in the Premier League since his debut in the competition in October 2012.

- Brighton striker Connolly became the 100th player from the Republic of Ireland to score a Premier League goal and the first to score a brace in the competition since Shane Long against Arsenal in December 2015.

Tottenham will be relieved to have the international break between this game and their next Premier League fixture, which is at home to Watford on October 19.