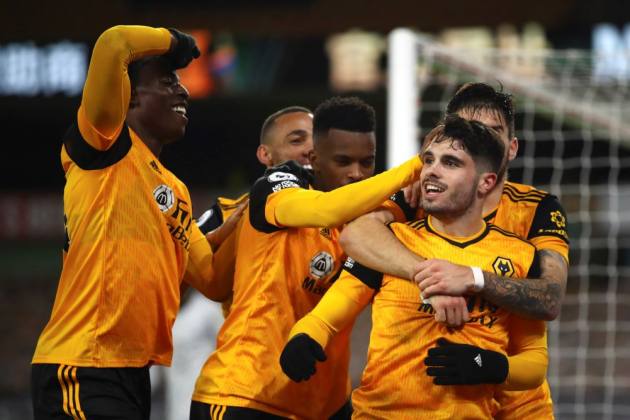 Pedro Neto was Wolves' hero in second-half stoppage time as the Portugal international sealed a 2-1 comeback win over Chelsea at Molineux on Tuesday. (More Football News)

Frank Lampard's men went into the match the possibility of going top temporarily, but Wolves showed admirable character to come from behind to secure a fine victory against the odds.

Kurt Zouma went closest to breaking the deadlock late in the first half as he hit the frame of the goal, before Olivier Giroud did convert his seventh goal in as many games with 49 minutes on the clock.

Wolves were unperturbed, however, as Daniel Podence – a nuisance to Chelsea throughout – got himself a deserved goal in the 66th minute to restore parity.

Chelsea had seemingly ensured a share of the spoils when Wolves had a penalty award overturned, Neto deemed to have simulated contact in the area, but the winger ultimately had the final say in the fifth minute of stoppage time.

82 - Each of Wolves' last 82 goals in the Premier League have been scored by non-British players (excl. own-goals) - only Arsenal have had a longer such run in the competition (171 between October 2005-February 2008). Pack. #WOLCHE pic.twitter.com/0zioYd5BNz

A largely drab first half belied the drama that was to unfold in the second period, with the only moment of true excitement occurring right before the interval when Zouma sent a towering header onto the crossbar.

Wolves were not so lucky soon after the restart, however.

Ben Chilwell's low delivery from the left was met by Giroud at the near post and Rui Patricio could not quite keep an instinctive finish out of his bottom-right corner.

Fabio Silva then had what would have been his first Premier League goal disallowed for offside, though Wolves did draw level in the 66th minute.

Chelsea failed to deal with the tricky Podence, and his lovely effort took a slight deflection off a defender on its way into the back of the net.

The hosts then seemingly had the chance to clinch victory taken away from them when a VAR review corrected the referee's initial error of pointing to the spot when Neto went to ground under pressure from Reece James.

But all eyes were on the Wolves man for the right reasons at the end, as Neto latched onto Vitinha's pass on the counter, ran at Zouma and fired a pinpoint finish into the bottom-right corner.

What does it mean? Blues to lose ground at the top

Whatever happens for the rest of this midweek matchday, Chelsea will go into the weekend action further adrift of the top of the table as a consequence of this defeat.

With champions Liverpool and pacesetters Tottenham facing each other at Anfield on Wednesday, this was a chance to gain ground – a victory at Molineux would have taken Chelsea top.

But now, as many as four teams could move above the fifth-placed Blues, who are three without a win across all competitions. Heading into the hectic Christmas schedule without momentum could prove damaging.

Back of the Neto!

If we ignore his exhibition of the dark arts with respect to the penalty that was overturned, Neto was otherwise a standout here. His winner was a delight, but the forward had already troubled Edouard Mendy in the first half and he almost got a second goal in the dying seconds. Add to that a couple of key passes – bettered by no other Wolves player – and you have a fine individual display.

While Neto impressed on Wolves' flanks, it is difficult to say the same about Timo Werner. None of his three shots found the target, and he missed the chance to get a shot away from close range in the second half as the ball squirmed under his foot at the crucial moment. His 44 touches of the ball were only more than two players in Chelsea's starting XI – Mendy and Giroud, the latter of whom was withdrawn in the 71st minute – and the German is now eight games without a goal.

- Wolves have lost just one of their past six Premier League home games (W3 D2) and have now avoided losing consecutive home top-flight games since January 2019.
- Chelsea have lost consecutive Premier League games for the first time since December 14, 2019.
- Chelsea failed to direct a single shot on target in the first half of a Premier League game for the first time since September 20 against Liverpool. Their opener came with their first shot on target of the game on 49 minutes.
- Giroud has netted six goals in his last four away games in all competitions, as many as he managed for the Blues in his previous 20. No Chelsea player has netted more this season (eight, level with Timo Werner).
- Neto's strike for Wolves at 94:39 was the latest winning goal scored in a Premier League game against Chelsea since we have exact goal times in the competition (since 2006-07).

Chelsea return to action in a London derby against West Ham on Monday, while Wolves go to Burnley the same day.