EPL: Liverpool Celebrated The Return Of Fans To Anfield With A 4-0 Victory Over Wolves 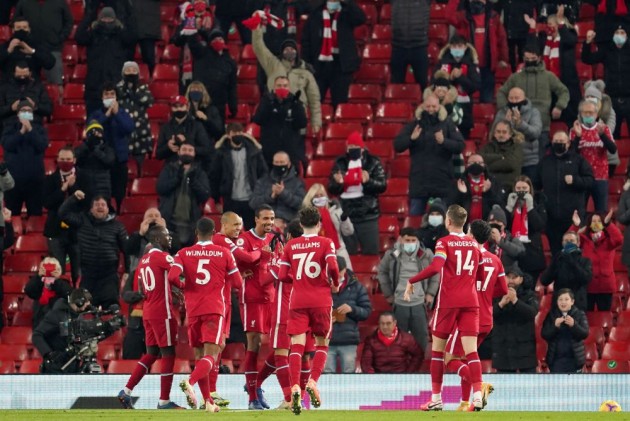 Liverpool celebrated the return of fans to Anfield with a 4-0 victory over Wolves on Sunday. (More Football News)

Sitting three points off the summit of the Premier League following Tottenham's win over Arsenal earlier in the day, the Reds responded by claiming a typically hard-earned victory over Nuno Espirito Santo's side.

Goals from Mohamed Salah, Georginio Wijnaldum and Joel Matip, along with an own goal from Nelson Semedo, ensured they drew level with Spurs on points to move second by virtue of goal difference.

Perhaps buoyed by their returning supporters, Liverpool started the brighter, and went close when Sadio Mane headed over after a slick one-two with Andy Robertson.

But they were quickly reminded of Wolves' threat at the other end as Daniel Podence drew a fingertip save from Caoimhin Kelleher with a wonderfully inventive chip.

Both sides looked relatively comfortable defensively otherwise and, as such, it was no surprise that, when the opening goal came, it was thanks to an error rather than a moment of invention.

Jordan Henderson's ball over the top looked primed for a headed clearance but, in trying to chest it down, Conor Coady simply set up Salah for a left-footed finish into the right-hand corner.

17 - Today is the 17th time Mo Salah has both scored and assisted a goal in the same Premier League game for Liverpool; since 2017-18, this is five more times than any other player (Son Heung-min, 12). Force. pic.twitter.com/5Al05BiK4J

The visiting captain looked to have redeemed himself when he was awarded a penalty on the stroke of half-time, but replays showed he had in fact not been touched by Mane before going down in the box, leading to a VAR turnover.

Despite Liverpool's lead, the second half continued in nip-and-tuck fashion, with both sides fashioning half-chances but remaining wary of committing too much to attack.

However, the game was eventually taken away from Wolves on the hour mark thanks to Wijnaldum who, arriving on the break and using Coady as a shield, curled a beauty into the Kop-end top corner.

Matip quickly followed that with a third, the defender heading in a delicious inswinging Salah cross from the right wing after finding himself at the top end of the pitch for a corner.

And a memorable night for the 2,000 supporters allowed into Anfield was capped with a fourth goal with a quarter of an hour still to go, Semedo inadvertently putting through his own net in attempting to block a Mane effort.

What does it mean? Champions keep Spurs in sight

Despite their season having been largely defined by an injury crisis that is far from over, Liverpool continue to show they are more than capable of retaining their Premier League title.

As for Wolves, who stay 10th, defeat serves to somewhat temper the excitement that has surrounded their fine start to the campaign, particularly in the aftermath of that win at Arsenal last time out.

He may have played more football than any other Liverpool player this season, but Robertson just gets better and better.

The Scot took 87 touches (bettered only by Curtis Jones and Jordan Henderson), put in eight crosses, and regained possession on seven occasions as he starred for the hosts.

A boyhood Liverpool fan and a product of the club's academy, Coady is always keen to impress when he heads back to Anfield.

But the defender endured a night to forget, losing possession nine times – most crucially in teeing up Salah's goal – and completed just 61.5 per cent of his passes into the opposition half.

He was also perhaps fortunate not to pick up a yellow card for an overturned penalty win late in the first half.

5 - Five of Joel Matip's six goals for Liverpool in all competitions have been headed, with five also coming from a corner situation (one free-kick). Target. pic.twitter.com/ChMSFxiYs0

- Liverpool have won 31 of their past 32 home league games (D1), scoring 93 goals while conceding just 25 in this time.
- Wolves have lost eight consecutive league meetings with Liverpool, conceding 19 goals and scoring just twice in this run.
- Since Liverpool's first match after Virgil van Dijk's injury against Everton (Ajax in October), the Reds have conceded just six goals in 11 games in all competitions, keeping six clean sheets in the process.
- Mohamed Salah has 52 Premier League goals at Anfield for Liverpool. Only Lionel Messi at Camp Nou (63) and Robert Lewandowski at the Allianz Arena (59) have more at a single venue in the big-five European leagues since the Egyptian joined the Reds in 2017.
- At 22 years and 13 days, Caoimhin Kelleher became the third youngest Liverpool goalkeeper to keep a Premier League clean sheet, after Scott Carson (19y 211d) and Chris Kirkland (21y 234d), and youngest to do so on his first such start for the Reds.