The Egyptian Salah could have got his goal No.101 in the Premier League had he not chipped above the net a Sadio Mane assist. 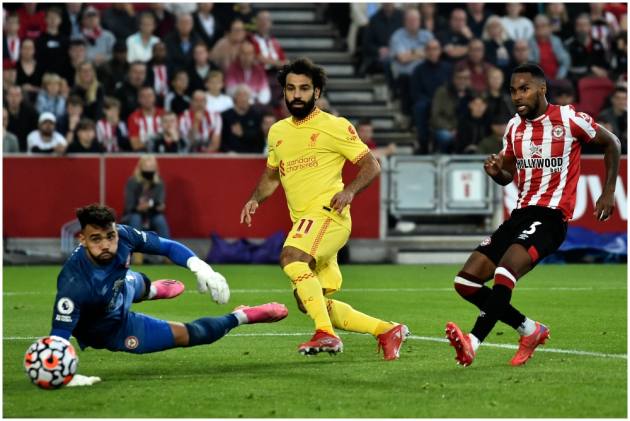 Mohamed Salah scored his 100th Premier League goal for Liverpool on Saturday but it was not enough to beat Brentford, which twice pegged the Reds back in a breathless 3-3 draw. (More Football News)

Juergen Klopp’s side was unable to reap the maximum profit from slip-ups by Manchester United and Chelsea earlier in the day as it shared the points with Brentford in early-evening entertainment in west London.

Instead, Liverpool moved just one point clear at the top, while preserving the top flight’s only remaining unbeaten record. And Klopp will be relieved at that after Ivan Toney had what would have been a late winner ruled out for offside.

The German coach will also know his side will not face many tougher trips all season, with vibrant Brentford leading through Ethan Pinnock and, following goals from Diogo Jota and Salah, equalizing through Vitaly Janelt.

Then, when Curtis Jones smashed Liverpool ahead again, Bees sub Yoane Wissa came up with another equalizer. There was a taste of things to come when both teams were denied by goal-line clearances in the opening 10 minutes.

First, Salah missed out on a seventh-minute opener thanks to a spectacular piece of defending from Kristoffer Ajer, who slid in to hook the ball off the line.

Moments later, at the other end, Bryan Mbeumo latched onto Toney’s flick-on and lifted the ball over Alisson, but this time Joel Matip got back to scoop the ball clear from underneath the crossbar.

Brentford was more than holding its own against the 2020 champion and took the lead in the 27th minute. Spanish winger Sergi Canos — who spent three years at Liverpool as a youngster but played only nine minutes for the first team — got down the Reds’ right and drilled in a low cross that Toney helped on for Pinnock to tap in.

The lead lasted barely three minutes, however, before Jordan Henderson swung in a cross from the right and Jota headed home at the far post. Seven minutes before the interval, Henderson teed up Jones on the edge of the area and his shot was deflected onto a post by Pinnock.

Jota should have been celebrating his second of the afternoon from the rebound but somehow David Raya got his body in the way of the shot and it flew wide. After the break Salah grabbed his landmark goal. The Egypt striker was initially flagged offside as he tucked away Fabinho’s ball over the top, but a VAR check showed he was in fact onside.

Back came Brentford, though, and when Pontus Jansson slid in to crash Ajer’s cross onto the bar, Janelt popped up at the far post to force the loose ball home. Jones blasted Liverpool back in front in the 67th with a low drive that took a deflection in a crowded penalty area as it flew past Raya.

Salah should have had goal No. 101 after he was played in by Sadio Mane but he chipped the ball onto the roof of the net. Moments later Wissa arrived at the far post and produced a composed finish to equalize yet again, before Toney was denied a late winner by the linesman’s flag.