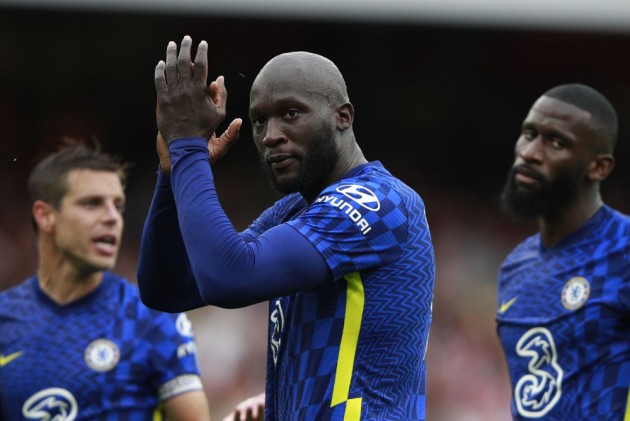 Romelu Lukaku and Harry Kane, two of the world's best strikers, were back in action in the Premier League after some time away. (More Football News)

Lukaku made the better impression.

Making the first appearance of his second spell at Chelsea, the Belgium international marked his return to England's top division after a two-year absence by scoring one goal and playing a part in the other in a 2-0 win at Arsenal.

“Dominant,” was how Lukaku described his display that saw him bully Arsenal's patched-up defense into submission at Emirates Stadium.

Kane, the Tottenham striker heavily linked with a move to Manchester City, hadn't been seen in the Premier League since the final day of last season, having returned late for preseason training amid growing intrigue over his future.

The England captain entered as a 71st-minute substitute against Wolverhampton — to applause from Spurs fans despite his apparent desire to join City — and wasted a one-on-one opportunity before his team sealed a 1-0 win at Molineux. The only goal came in the ninth minute, a penalty earned and converted by Dele Alli.

“Harry is still in the process of increasing and improving his level of fitness," said Tottenham manager Nuno Espirito Santo, who coached Wolves for the last four seasons, “but he is one of the best players in the world.”

In just the second tweet sent from his account in the past two weeks, Kane wrote “Brilliant battling win” alongside two photos of him on the field at Molineux.

With a little over a week remaining of the summer transfer window, his future is still uncertain.

Both Chelsea and Tottenham have opened the season with two straight victories. Manchester United couldn't quite join them.

Mason Greenwood's second-half goal earned United a point from a 1-1 draw at Southampton. Paul Pogba set up the goal with his fifth assist already this season, having set up four in United's 5-1 win over Leeds on the opening weekend.

Lukaku failed to score in 15 appearances for Chelsea in his first spell at the London club from 2011-14 — two seasons of which were spent out on loan. It took him 15 minutes to score against Arsenal, having been thrown into the team at the first opportunity by Chelsea manager Thomas Tuchel.

The way he pinned Arsenal center back Pablo Mari and then shrugged off the same player as he ran into the area to convert Reece James' cross demonstrated a striker at the top of his game. It was just what Chelsea missed last season, even though the team managed to win the Champions League.

Lukaku was also involved in Chelsea's second goal, scored by James in the 35th. A pass from the left was dummied by Lukaku, who had dragged Arsenal's defense out of position, and that allowed Mason Mount to set up the right back for a rising finish into the net.

“He proved his value for the squad already,” Tuchel said of Lukaku, who joined from Inter Milan for a club-record fee of $135 million.

“He linked really well with Mason and Kai (Havertz) up front.”

Arsenal also lost its opening game 2-0, at Brentford. It is the first time the team has opened a league campaign with two losses without scoring.

After a couple of lean years, Dele Alli is back as a first-choice player in Tottenham's team and he scored his first Premier League goal since March 2020 in the win at Wolves.

The midfielder converted a penalty he won himself, having been felled by Jose Sa after getting to a through ball just ahead of the Wolves goalkeeper.

Tottenham was thankful to captain Hugo Lloris for preserving the lead, with the goalkeeper denying Adama Traore in a one-on-one chance midway through the second half. Earlier, Wolves striker Raul Jimenez struck the crossbar after a foraging run by Traore.

Tottenham opened with a 1-0 win at City, which Kane missed because he was not deemed fit enough to even be on the bench.

Man United tied the longest unbeaten away record in English soccer's top division — at 27 games — but was disappointed to leave the south coast with just a point.

Southampton conceded nine goals without reply at Old Trafford in February but took the lead when Che Adams' strike deflected in off Fred's outstretched boot. Greenwood secured a draw by latching onto a pass from Paul Pogba, who added to his four assists from the win against Leeds last weekend.

United manager Ole Gunnar Solskjaer complained there was a foul on Bruno Fernandes in the build-up to Southampton's goal and made comments that were similar to those on Saturday by Liverpool manager Juergen Klopp, who said after a win over Burnley that people should “watch wrestling” if they liked some of the challenges Burnley put in.

“We have to look at it,” Solskjaer said, “because we can't go from one extreme of volleyball or basketball from last year and go into rugby now.”